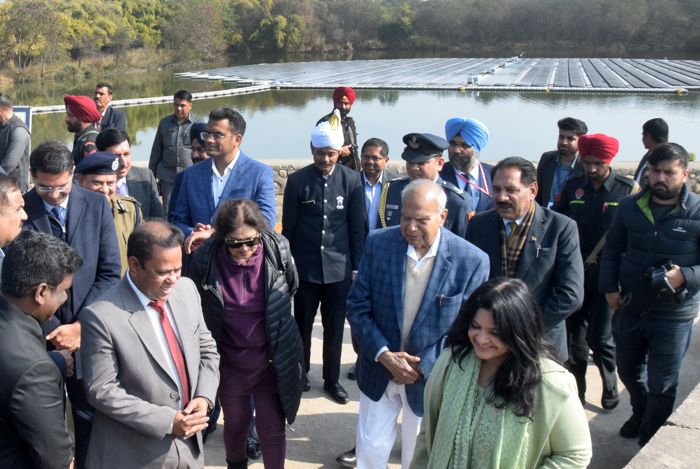 UT Administrator and Punjab Governor Banwarilal Purohit during the inauguration of a floating solar power plant at the Dhanas lake in Chandigarh on Monday. TRIBUNE PHOTO: NITIN MITTAL

After inaugurating North India’s largest floating solar project of 2MWp at the waterworks in Sector 39 and another one of 500kWp along with fountains at the Dhanas lake today, UT Administrator Banwarilal Purohit asked the citizens to join hands with the administration in promoting solar power.

Purohit appreciated the efforts of CREST and the Forest and Wildlife Department in developing and beautifying the lake with fountains, making it another tourist spot of the city after Sukhna Lake. He urged the citizens to install rooftop solar power plants on houses, office buildings, factories, etc, he said.

Local MP Kirron Kher expressed her happiness to see the Dhanas lake as a beautiful tourist spot. She said it would create mass awareness towards solar energy.

UT Adviser Dharam Pal also appreciated the efforts of CREST and expressed his belief that with this pace, Chandigarh could achieve the dream target of the Union Government to become a 100% renewable energy-powered Union Territory in near future.

Debendra Dalai, Secretary, Science and Technology, and Chief Executive Officer, CREST, said the energy needs for all buildings and offices under the Forest Department would be met through the Dhanas lake plant. He said 70% of the revenue generated from the 2MWp plant would be deposited in the government treasury and the balance 30% would be given to the Municipal Corporation.

Dalai said Chandigarh was a land-locked city and rooftop solar plants were the only option for green electricity generation here. The floating plants help conserve valuable space of the city and also lower evaporation loss to meet the water needs of 20,000 people annually.