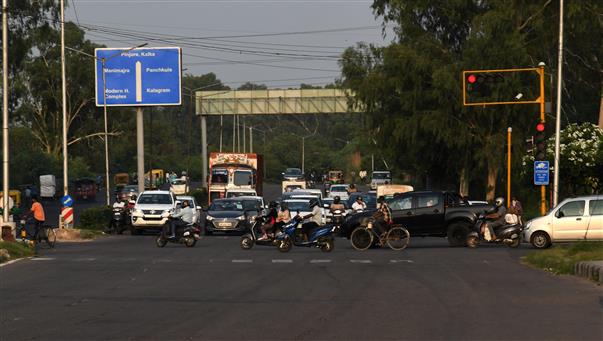 What these rankings seem to indicate is better monitoring of air pollution levels in these states. Tribune file photo

Chandigarh, Himachal Pradesh and Punjab were the only ones among 23 states and union territories listed in the National Clean Air Programme (NCAP) to have above average readings in the past three years for PM 10, an analysis of the National Air Quality Monitoring Programme tracking has said.

NCAP policy says 104 readings are required in a year to get an accurate picture.

The list shows Punjab has an average PM 10 reading of 133 over the last three years. Himachal Pradesh stands at 125, and Chandigarh at 102.

This does not necessarily mean that pollution levels have gone down in these states--- in fact pollution levels in all three continue to be much higher than acceptable CPCB norms and way above the WHO limits of 10 micrograms/cubic-metre. What these rankings seem to indicate is a trend on air pollution in Chandigarh, Punjab and Himachal Pradesh, and that all three monitor them better than other states in the country.

Delhi, meanwhile, ranked the most polluted state for PM 10 monitoring data over an average of three years. The national capital was followed by Jharkhand and Uttar Pradesh, according to the CarbonCopy and Respirer Living Sciences ‘dashboard’ of comparative picture of PM 2.5 and PM10 for the non-attainment cities from 2016 onward.

Ghaziabad had the worst PM 10 level at 253 among 122 non-attainment cities, followed by Delhi (246) and Dhanbad (242). Dehradun ranked fourth, and was followed by Bareilly, Lucknow, Firozabad, Silcher, Noida and Kanpur. Varanasi just missed the top 10, coming in at eleventh.

Santosh Harish of the Centre for Policy Research says “tracking annual average concentrations provides an objective way to verify whether air quality levels have improved or not. Annual averages have the advantage to speak better to long term exposures as opposed to episodic highs and lows”.

In Punjab, Jalandhar and Ludhiana have four manual monitors each, Amritsar has three, Khanna, Patiala, Dera Bassi and Naya Nangal two each and Mandi Gobindgarh and Dera Baba Nanak one station each. Punjab's average PM10 readings for the 2016-2018 remained at 133 micrograms/cubic metre, higher in comparison to states like West Bengal, Gujarat, HP, Chandigarh, Maharashtra, TN, Andhra, Assam, MP and Chhattisgarh.

Chandigarh fared the best among all NCAP states with 141 followed by Himachal Pradesh. The UT has five monitors and saw a slight annual improvement in the PM 10 levels from 105 in 2016 to 102 in 2018.  With three monitors, Himachal had a three-year average PM10 of 125, almost double the acceptable CPCB norm of 60 micrograms/cubic-metre.

The dashboard provides a comprehensive picture of India’s National Ambient Air Quality Standards (NAAQS) which come under the NAMP. The Ministry of Environment, Forests and Climate Change notified the NCAP in January 2019 with the aim to reduce 20-30 per cent PM levels in 122 non-attainment cities by 2024, taking 2017 as the base year. These cities failed to meet the NAAQS standards for the period of 2011-2015 and are largely considered the most polluted cities among those being monitored.