Move after plaints of violations | Officials to visit each dwelling

Following complaints of illegal occupation, the Chandigarh Housing Board (CHB) will carry out a survey of more than 17,000 flats allotted under various schemes to original allottees from the economically weaker section (EWS).

Following complaints of illegal occupation, the Chandigarh Housing Board (CHB) will carry out a survey of more than 17,000 flats allotted under various schemes to original allottees from the economically weaker section (EWS).

Such flats can’t be sold, transferred or handed over to others. In case of violation, allotment will be cancelled. These may be allotted to other eligible persons. Yashpal Garg, Chief Executive Officer, CHB

The CHB has allotted the flats under the Rehabilitation Scheme, Small Flat Scheme and Affordable Rental Housing Scheme for occupation by the allottees and their family members, including parents, siblings, spouse, children and their spouses, and grandchildren. 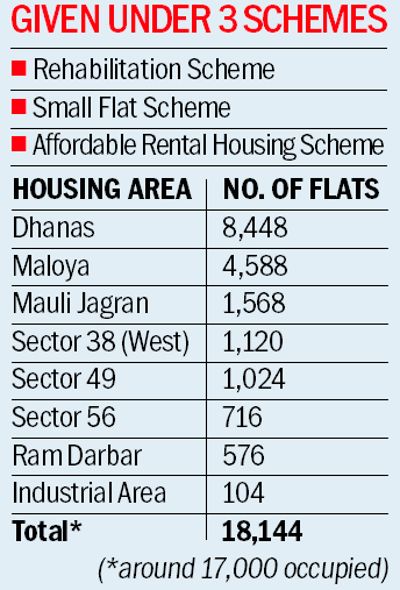 “Such flats cannot be sold, transferred or handed over to other individuals,” said Yashpal Garg, Chief Executive Officer, CHB. He said there were unconfirmed complaints regarding some allottees having sold or transferred their flats illegally. Since such flats could not be sold or transferred, such instances amounted to violation of the terms and conditions and might attract criminal proceedings for fraud or cheating, said Garg.

“Over the next few days, the CHB will start a survey of all such flats. Teams of officers will visit each of these flats,” he said, adding it would check whether or not the flat was occupied by the original allottee and his family; monthly rent, licence fee and instalments were being paid regularly; and dues were pending against the allottee.

He further said at the time of survey, the occupants were required to establish their identity and give proof of being family members of the allottee. More than 80,000 people were residing in these flats, he added. “Friends, cousins, relatives may reside with the allottee for a shorter duration but cannot be permanent residents of the flat.

Occupation of the flat by relatives, cousins, friends or other persons in the absence of the allotee or family members will be treated as violation and the allottee will be required to explain the same,” said the CEO.

If it was found the allottee or his family members were not residing in the flat, it would be treated as violation of the terms and conditions of allotment, he added.

Garg said nearly Rs 15 crore was pending against the allottees and the list of pending dues had been uploaded on the website of the CHB.

The CEO asked all allottees to cooperate with the CHB officers during the survey. The officers would be carrying their IDs at the time of survey, he added.