Chandigarh: It's chock-a-block at PGI emergency : The Tribune India

Chandigarh: It's chock-a-block at PGI emergency 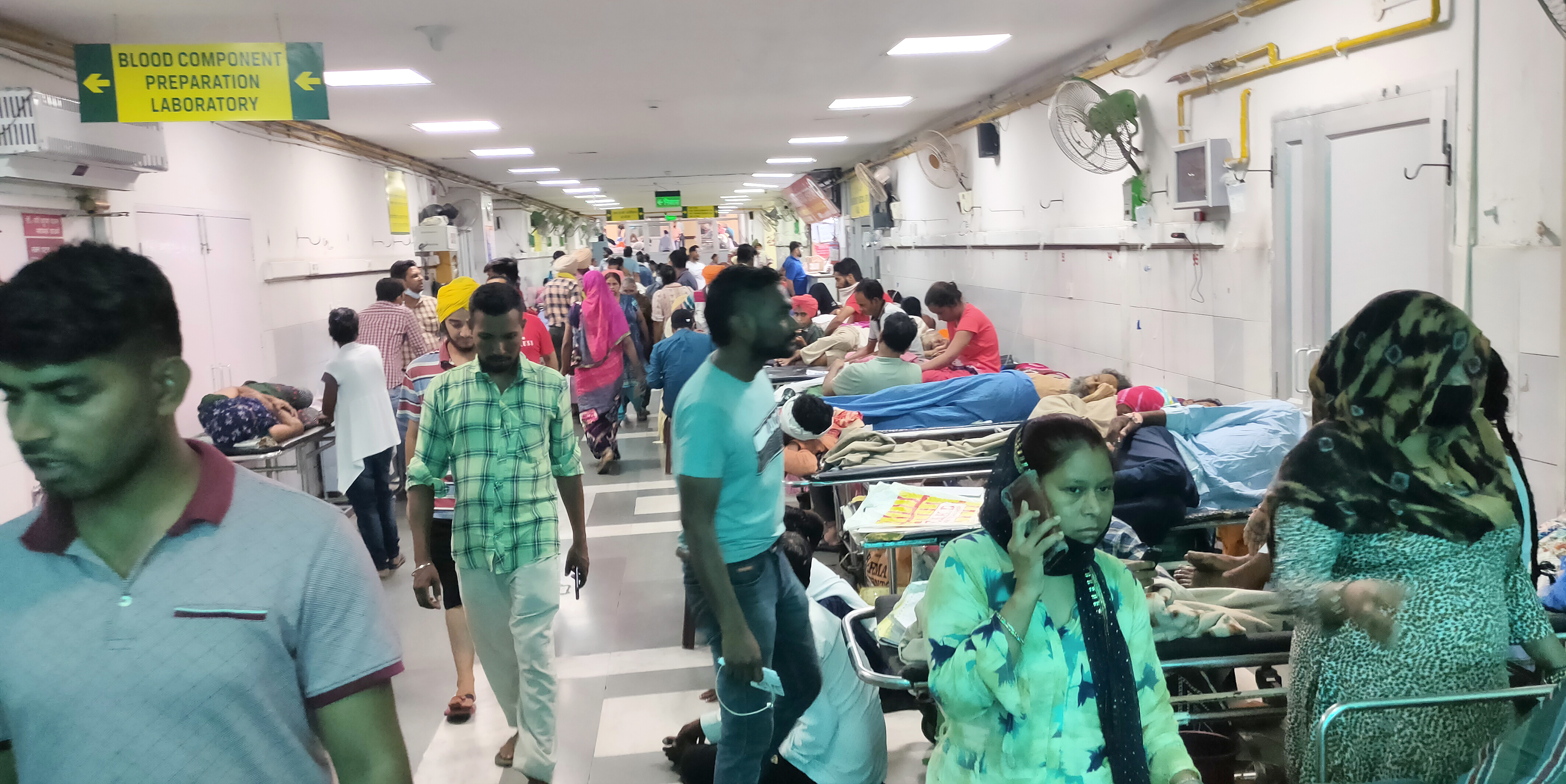 The overcrowded emergency ward at the PGI, Chandigarh. Tribune photo

The emergency ward at the PGI is daily cramped up with hundreds of patients lying on stretchers, positioned wherever space is available in the entire hall.

With just over 200 beds at the Advanced Trauma Centre and the emergency ward, the institute sees a relentless flow of around 800-1,000 patients a day, leading to a jampacked ward. Each patient is accompanied by one or two attendants, which converts the footfall to 1,600 at the emergency ward of the PGI.

The mad rush is nothing less than an ordeal for both patients and doctors. While the patients suffer from an extended waiting time in the emergency, the latter suffer from being overworked due to a shortage of manpower.

The rush is such that some patients are being treated even in corridors of the emergency halls with drips hanging on windows and sun rays piercing through glasses, making it difficult for patients to manage in poorly ventilated spaces. Divya, a patient from Punjab, who is taking treatment since June 9 at the PGI, said she was being treated on a stretcher in a corridor as there no other space was available. “It is difficult to stay in a corridor in this sweltering heat as there are no fans. We tried for a private room, but there was no availability,” said the husband of the patient.

Vikrant, who was admitted to the emergency ward after meeting with a serious road accident, said he had to stay on a stretcher placed near a washroom for three days.

Not just this, only one senior resident is posted at each hall of the emergency. A senior resident doctor posted at Block A of the emergency, where all severely critical patients in need of oxygen support are admitted, said, “Around 25 patients are admitted here and all are in a serious condition. I am handling them alone. In such a scenario, it becomes difficult for us to communicate with a patient’s attendants repeatedly about the medical problem the patient is facing. Communication and counselling are major issues when it comes to handling the patient’s attendants.”

Another senior resident said three-four monitors of Block A were not working properly due to which the vitals of some patients could not be checked.

At the emergency ward 22, where serious patients are admitted, one nurse handles four patients at a time. Nursing officers also bear the brunt of the heavy rush at the PGI as they have to take care of patients from giving CPR to intubating the patients, assisting doctors in putting patients on ventilator and clearing dead bodies from emergency hall. “As soon as a patient is admitted, nursing officers take care of the patient till he or she is discharged. We also take care of the personal hygiene of patients and give them feed. Sometimes, we have to bear with the frustration of patient’s attendants as availing treatment is very exhaustive,” said a nursing officer.

Patients are often seen raising a hue and cry and yelling at doctors due to the time lag in availing of the treatment. Sometimes, medicines prescribed are not available at the PGI pharmacy and the Amrit pharmacy due to which attendants have to go to chemist shops outside the institute. A medicine prescribed in the morning is made available by the evening, which leads to further delay in the treatment. Patients are also seen rushing from one building to another for investigations prescribed by doctors, which adds to the time in line of treatment.

Attendants can be seen chasing doctors to ask about the line of treatment and medication required for their patient. In some cases, attendants have to wait for a couple of hours to hear back from doctors.

Manpower has been my priority and the institute is expediting the process of filling vacant posts so that the burden on our doctors gets reduced to some extent. — Prof Vivek Lal, PGI Director