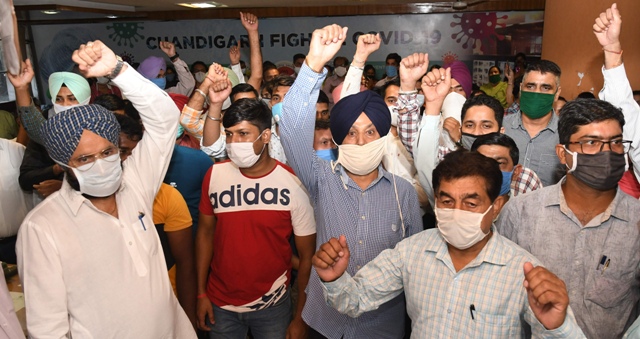 High drama was witnessed at the Municipal Corporation office on Tuesday when a group of state BJP leaders and Grain Market Association office bearers clashed with the staff members of MC Commissioner’s office over a meeting with the civic body chief.

One of the members of the delegation, ‘Mr (Gorav) Goyal’, allegedly manhandled and abused the Commissioner’s personal secretary Jatin Saini when he asked them to wait for some time as the Commissioner was already in a meeting.

In his complaint to the Sector 17 police station, SHO, Saini has written, “I was on duty and he obstructed me in my duty as well as manhandled me and used abusive language. He also threatened me of dire consequences and to remove me from service. It is requested to take appropriate legal action against Mr Goyal.”

Significantly, the complaint also mentions “other BJP members namely Rambir Bhatti (state general secretary of Chandigarh unit) and others were also present there”.

Sources said Saini asked the BJP leaders to wait even as a former Congress mayor went in to meet the civic body chief. This enraged the BJP workers who had come to meet the MC Commissioner about the demands of the Grain Market Association to put the enhanced parking charges on hold.

The MC Commissioner’s personal secretary told the BJP men that former mayor had a prior appointment with Yadav, hence he had gone inside to meet the civic body chief.

The BJP delegation came out of the office and resorted to sloganeering and sat on a protest. State BJP president Arun Sood, Asha Jaswal and deputy mayor Jagtar Singh Dhillon intervened to disperse them.

In a countermove, five-six employees and union members too gathered outside the MC office in protest against the manhandling of an employee. All this while, a heavy police presence kept an eye on the developments.

However, during the melee and subsequent protests, Covid protocols were flouted at every step in the MC office, Sector 17, as well as the Grain Market Association meeting at the Satsang Bhavan in Sector 26.

“Various unions have submitted a memorandum to me and called for a pen-down strike tomorrow,” said MC Commissioner KK Yadav.

State BJP president Arun Sood said, “Somebody is provoking the employees to indulge in politics otherwise why would they raise slogans against the BJP and the prime minister.”