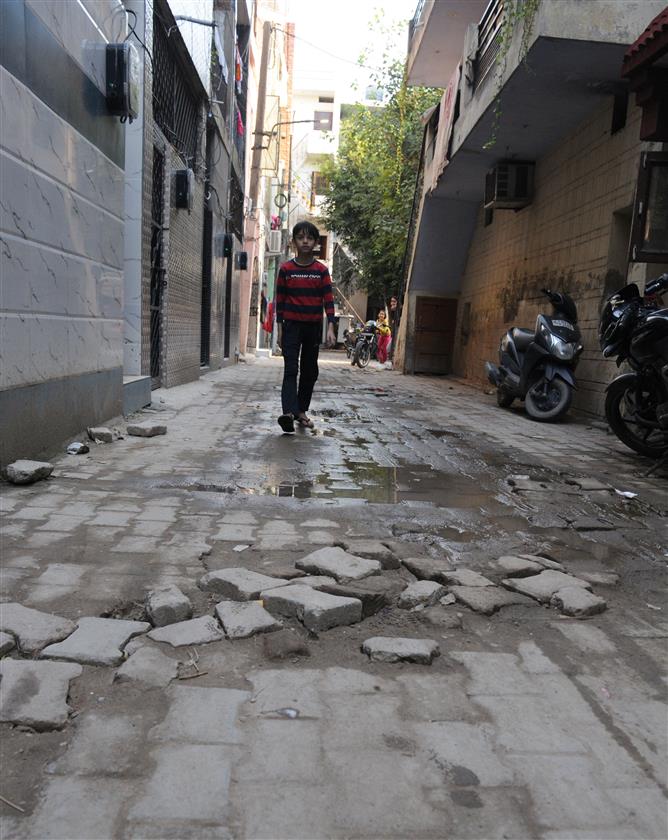 BJP councillor from ward number 23 Bharat Kumar shows a long list of works done by him, but a number of civic issues have remained unresolved during his five-year term.

Work of road recarpeting and laying of paver blocks could not be completed in Hallo Majra and Ram Darbar. Hallo Majra residents complained of dirty water supply while Ram Darbar residents raised the issue of ill-maintained parks, dark spots and lack of cleanliness.

Gurleen Kaur, a resident of Hallo Majra village, lamented, “People are forced to drink dirty water. Several have been taken ill. Sewer pipelines were laid, but sewage still flows on roads. They first put up paver blocks, then remove these for laying pipelines and finally refixed these. This led to improper fitting and several paver blocks broke. It seems the authorities have no idea what they want to do.”

BS Rawat, a former general secretary, Hallo Majra Deep Complex Welfare Association, said, “We always get dirty drinking water supply. Besides, the foundation stone for laying paver blocks in our area was laid twice, but still 30 to 35 per cent work is yet to be done. The promise of regularising houses outside lal dora was not kept. There are no street lights. The only good thing that has happened is that we have got digital electricity meters.”

Rajiv Kumar, a resident of Ram Darbar shared, “Roads and work on laying of paver blocks has been done in Phase 2 of Ram Darbar, but it is yet to be done in Phase 1. Parks are not maintained and have wild grass and damaged swings and boundary grills. The street lights are not working. Garbage dumps in various parts is another big issue.”

Residents said promises of regularising houses outside lal dora and getting houses converted into freehold from leasehold too remained unfulfilled.

The councillor was often seen raising his ward issues at House meetings. During the mayoral poll earlier this year, the dejected BJP leader had announced his resignation from the party for not being given any of the three posts of Mayor, Senior Deputy Mayor and Deputy Mayor. However, the sulking councillor was later placated by senior party leaders. His ward has now been declared reserved for an SC woman candidate and he is looking at contesting from some other ward.

In the entire ward, road and paver blocks work was done. For the remaining places, estimates have been prepared and the work will start soon. No complaint regarding dirty water has come to my knowledge. — Bharat Kumar, councillor