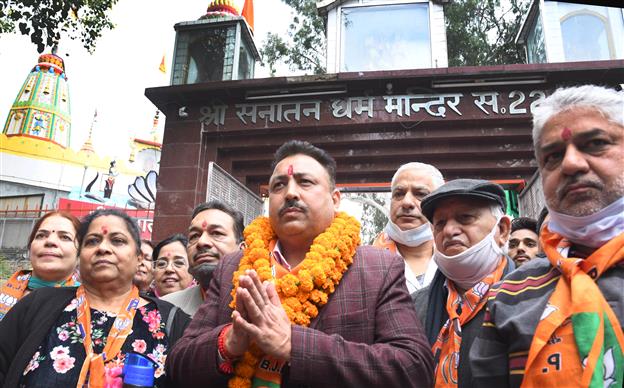 Mayor Ravi Kant Sharma of the BJP on the way to file his papers. Pradeep Tewari

There are several crorepatis among BJP, AAP and Congress candidates who filed their nominations for the December 24 MC elections today.

Aam Aadmi Party’s MC election campaign chairman Chandermukhi Sharma, who filed nomination papers from ward number 13 with the Election Commission, has Rs87-lakh moveable assets and Rs2.24-crore immovable assets. His spouse, who is into event management and astrology, has moveable assets of Rs93 lakh. Advocate Sharma has earlier been a councillor from the Congress.

Though Anju Katyal of AAP, who filed her nomination from ward number 22 today, has moveable asset of Rs26 lakh, her husband Satish Katyal has a whopping Rs8.06-crore moveable assets and Rs1.50-crore immovable assets.

Former Deputy Mayor Harmohinder Singh Lucky, who filed his nomination from the Congress from ward number 2, has immovable asset of Rs8.85 crore and moveable assets of Rs87.90 lakh.

Mayor Ravi Kant Sharma, who filed his nomination from the BJP from ward number 17, has shown Rs1.47-crore immoveable assets and Rs21-lakh moveable assets.