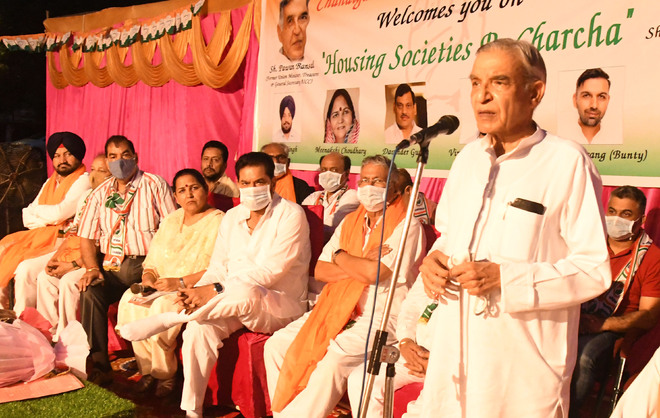 Sounding the poll bugle, senior Congress leader and former Union Minister Pawan Bansal today called upon the city residents to end “the miserable rule of the BJP” and bring his party to power during the upcoming Municipal Corporation elections for the betterment of general public.

“To give a befitting reply to the Central Government’s oppressive and anti-public policies, Chandigarh MC poll is a chance for the general public to defeat BJP and show them the mirror,” Bansal said while addressing a Chandigarh Territorial Congress Committee (CTCC) programme on ‘Housing Societies Pe Charcha’ in Sector 49 here.

Talking about the housing societies, Bansal said: “We are well aware of the problems faced by the residents. The Chandigarh MC in fact is in paralytic condition since the BJP came to power with no public welfare policies and plans in sight.”

On one side, the Centre is so prompt in making new laws but on other side it has failed to make one small law to empower the MCs, he pointed out.

The idea of setting up cooperative societies in Chandigarh was planned to settle the working class, who put their hard earned money to buy flats, in the city. However, exorbitant rates being charged for getting the properties out of lease hold, is a big hurdle for the residents.

After coming to power, Congress would work to solve the city residents’ problems on priority, along with ensuring the repair and maintenance of internal roads in societies, said Bansal.

Chandigarh Congress unit chief Subhash Chawla said: “We have formed a team to chalk out the problems faced by the society residents. We will make a comprehensive plan to solve them after coming to power.”