Chandigarh mum on sale of crackers, Dasehra organisers on edge : The Tribune India 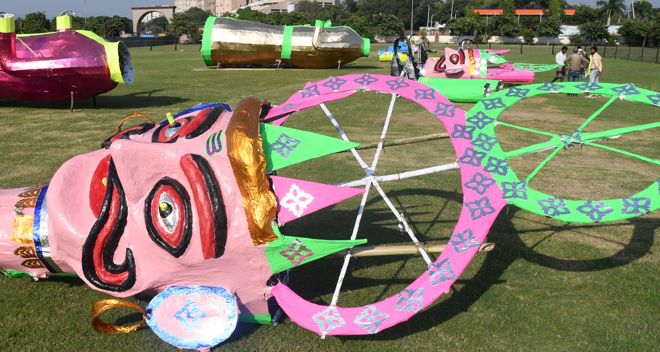 With Dasehra round the corner, uncertainty prevails among organisers over use of firecrackers in the city on October 5. The administration had imposed a ban on sale and bursting of firecrackers owing to the pandemic two years ago.

Office-bearers of Ramlila organising committees say with barely six days left for the celebrations, the UT Administration is yet to take a call on bursting of firecrackers.

Ban imposed during covid 2 years ago

“It is already late. The authorities should have taken the decision at least 20 days ago,” they say, adding preparations of making effigies are in final stage.

“We have to book firecrackers in advance. Further delay will only increase the cost of crackers,” they lament, adding with a sharp fall in Covid-19 cases, the administration should allow firecrackers this year.

Nearly four dozen Ramlila committees have applied for Dasehra events in the city this year, but they are in a fix due to lack of clarity on crackers.

More than a half a dozen cases were registered against organisers for bursting crackers in effigies last year due to delay in decision on firecrackers.

“We have incurred Rs 5 lakh on Ramlila and Dasehra mela and if there are no firecrackers, the celebrations will be lacklustre,” says Aggarwal.

Jitender Bhatia, patron, Sanatan Dharam Sabha Dussehra Committee, Sector 46, says they have to place crackers in effigies at least a day or two before these are erected.

A few days ago, the Chandigarh Cracker Dealers Association had urged the administration to allow green crackers in the city this year.

In a memorandum to Deputy Commissioner Vinay Pratap Singh, the association sought issuance of temporary licences for sale of green crackers on Diwali and Gurpurb.

Green crackers have been developed by the National Environmental and Engineering Research Institute (NEERI), a subsidiary of the Council of Scientific and Industrial Research (CSIR).

After carrying out tests by the CSIR-NEERI, licences have been issued to manufacture green crackers, they say.

Green crackers don’t contain aluminium, barium, potassium nitrate or carbon, making these eco-friendly. Barium nitrate is responsible for heavy smoke and emissions and green crackers contain lesser or no barium at all, they add.

Green crackers not only reduce air pollution, but also have a sound level of 100-110 decibels in comparison to the traditional crackers that create levels of around 160 decibels.

UT Adviser Dharam Pal says they will take a decision on sale and bursting of the firecrackers at the earliest.