Rains likely in 2 days, but not all road gullies cleaned yet 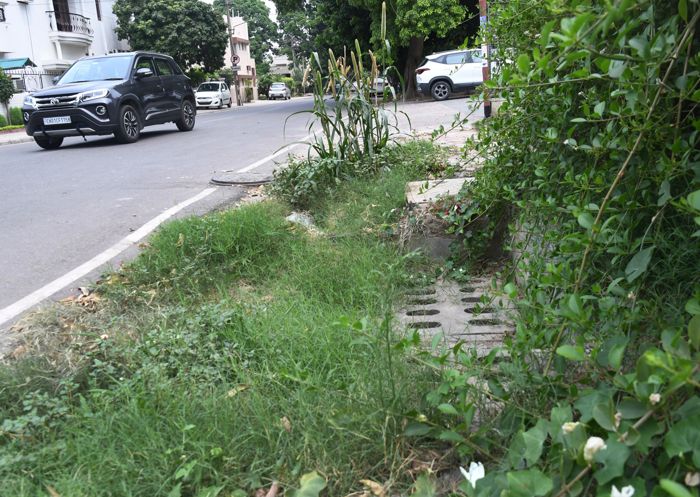 The monsoon is expected to arrive in the city in two days, but not all road gullies have been cleaned yet.

The problem of waterlogging during the rains is likely to give a tough time to residents. In a random check, it was noticed that at some places, let alone cleaning road gullies, even wild grass growth has not been removed. Garbage and dry leaves were also seen at some points.

During the rains, the water fails to pass through these road gullies and waterlogging is witnessed on roads as well as roundabouts.

“In Sector 22, many road gullies have garbage all over. On the stretch from the bus stand chowk towards Sector 18, 19 and 27, dry leaves can be seen accumulated on road gullies. There is a need for an effective mechanism and proper check,” said Rakesh Kanojia, president of the city-based Madagar Foundation.

Baljinder Singh Bittu, chairman, Federation of Sector Welfare Associations of Chandigarh (FOSWAC), said, “Road gullies are not being cleaned and due to it, people will face inconvenience during the rains. In our Sector 21, road gullies have huge wild grass growth. Rather than making tall claims, the MC should ensure work on the ground.”

However, the civic body claimed that it had already cleaned 85 per cent of the road gullies. “The road gullies are cleaned every year with a target date of July 15. Already 85 per cent road gullies stand cleaned. More labour has been deployed to complete the work by July 10. As many as 18 teams, comprising an SDE and a JE, have already been constituted to remain active in the field during the monsoon,” said MC Commissioner Anindita Mitra.

The MC has also released a complaint number for residents. “A telephone attendant will be available 24x7 at the control room, Sector 15, on 0172-2540200. Residents can lodge their complaint of waterlogging on this number. Four dedicated teams of workers will be deployed from July 1 at night to handle the problem of water stagnation,” said the MC chief.

Chandigarh: Pre-monsoon showers are expected to hit the city on Wednesday, while the monsoon is expected to arrive in the city between June 30 and July 1. The Meteorological Department has forecast light rain for the next five days. “The conditions are becoming favourable for further advance of the southwest monsoon into some parts of Punjab, Haryana and Chandigarh between June 30 and July 1. The maximum temperature is expected to fall by 4°C to 6°C in most parts of Punjab, Haryana and Chandigarh during the next four days,” said the weatherman.

Road gullies are not being cleaned and due to it, people will face inconvenience during the rains. In our Sector 21, road gullies have huge wild growth. Rather than making tall claims, the MC should ensure work on the ground.— Baljinder Singh Bittu, FOSWAC chairman