Viral infection is highly contagious and seen in pre-primary children 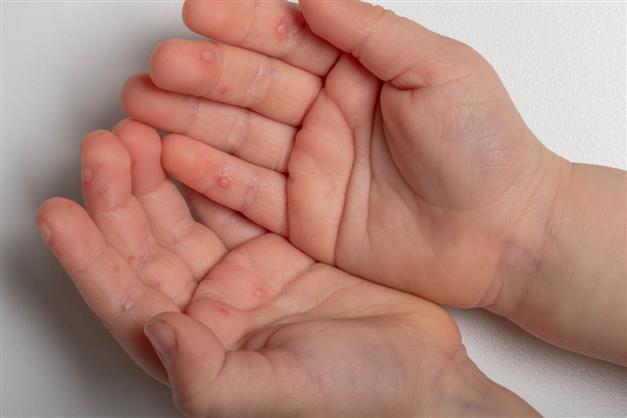 Schoolgoing children in the tricity have started reporting hand, foot, and mouth disease. The viral infection, which is highly contagious and seen in pre-primary children, has led to some schools in the city going online for a few days to break the chain of infection.

More than six cases of hand, foot and mouth disease (HFMD) have surfaced in private school at Phase 7, Mohali.

A student in the kindergarten section of St Kabir School, Sector 26, has also been diagnosed with HFMD. The school will remain closed for class nursery to class 2 and teaching has been shifted online mode.

Bhavan Vidyalaya (Junior Wing), Sector 33, has also been closed as a precautionary measure. St John School too has closed down until further notice.

The UT Health Department has also issued guidelines on the disease.

Hand, foot, and mouth disease, or HFMD, is a contagious illness caused by different viruses. Infants and children younger than 5 years are more likely to get this disease. However, older children and adults can also get it.

Depending on how severe the symptoms are, samples from the throat or stool are being collected and sent to a laboratory to test for the virus. Testing facility is available at Department of Virology, PGIMER.

Director of School Education, Harsuhinder Pal Singh Brar said, “No case from any government school is detected till now and hence we will not be issuing closure orders for now. We are keeping a close watch on such cases. Some private schools in the city have closed down as a precautionary measure.”

Hand, foot and mouth disease (HFMD) usually starts with fever, poor appetite, a vague feeling of being unwell and sore throat. One or two days after fever starts, painful sores usually develop in the mouth. They begin as small red spots and that often become ulcers.

The sores are often in the back of the mouth. A skin rash develops over 1 to 2 days. The rashes usually develop on the palms of the hands and soles of the feet; it may also appear on the knees, elbows, buttocks or genital area. Persons infected with the viruses that cause hand, foot, and mouth disease may not get all the symptoms of the disease. They may only get mouth sores or skin rash.