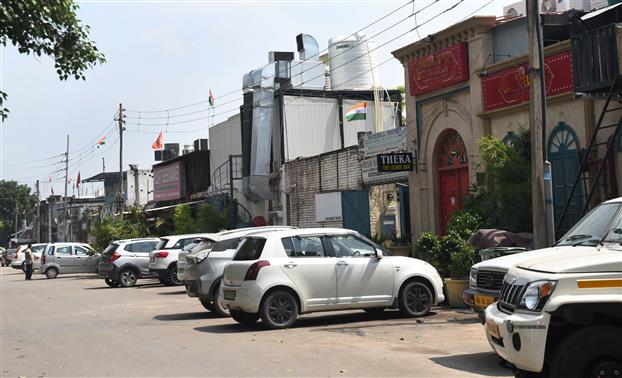 Most nightclubs have entries at the rear, right opposite the residential area. MANOJ MAHAJAN

Residents living in the vicinity of Sector 7 nightclubs continue to have a harrowing time owing to loud music and nuisance being created during night hours. Little action has been taken despite several complaints, they say.

Those residing near the lane where night clubs are located complain of difficulty in sleeping due to blaring music being played at discos.

“Most clubs close around 3.30 am. I am a senior citizen and a heart patient. I am unable to sleep and even children can’t concentrate on studies. Most of the times our windowpanes shake due to loud music,” said a resident, speaking on the condition of anonymity.

“The authorities should conduct a physical inspection of these clubs to ascertain whether the permissible sound limit is being adhere to or not. The UT Estate Office should also look for building violations,” said another resident.

The SDM (East) had even served a notice on the owners of these clubs in June, but violation continues. “It has failed deter them. The residents are peeved as there are no restrictions on these places,” lamented a senior citizen.

The Chandigarh Administration had issued a warning to three nightclubs in Sector 7 for playing music above the prescribed limit. SDM (East) Nitish Singla had issued directions to the night clubs — Vault, Grapho and Kakuna, — under Section 133 of the CrPC, but to no avail.

Besides blaring music, residents lament frequent traffic jams and rowdiness by drunk youngsters on the lane at the rear of these clubs.

“When youngsters leave at night, they often create nuisance. Almost all clubs use entry/exit at the rear end, which is right in front of the residential area. It should not be allowed,” said a resident.

“The area is littered with cigarette butts, broken liquor bottles and injections. Heavy vehicles unload inventory, causing the road to cave in. Fights and brawls are also commonplace,” rued a resident.

The SDM (East) said: “We are taking strict action. We have formed a panel to look into violations. Besides, another panel is looking at the decibel limits of the clubs.”

I have already served notice on three clubs. We have formed a panel to look for violations. Besides, another panel is looking at decibel limits of clubs. — Nitish Singla, SDM (East)