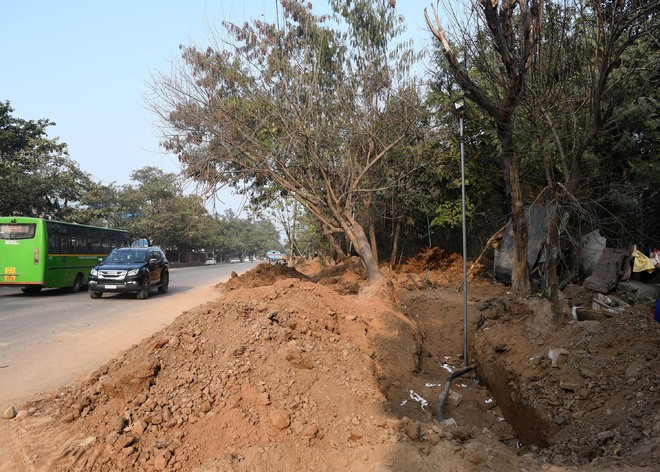 The UT Administration will cut down at least 39 trees for the widening of the road from the Poultry Farm chowk to the Chandigarh Transport Undertaking (CTU) workshop to the railway light point in the Industrial Area, Phase I.

The road is being widened to decongest traffic at Tribune Chowk. Parallel to Purv Marg, the road will ease traffic on Dakshin Marg and Madhya Marg. It will also improve the connectivity between the UT and Panchkula.

The road will connect the Poultry Farm chowk (Junction 39 on Dakshin Marg) to a road connecting Purv Marg with the railway station road at the T-point near the SDM (East) office in the Industrial Area, Phase I.

The Horticulture Division of the UT Engineering Department has invited tenders for cutting down of 39 trees — 12 Arjun Terminalia trees, seven Mulberry, six each of Alstonia Scholaris and Terminalia Bellirica, two each of Balam Kheera and Philkhan, and one each of Deak, Kelotoria, Cassia Fistula and Akash Neem.

A senior official of the Engineering Department said to compensate the loss, five times the number of trees being axed would be planted as per the guidelines of the Environment Ministry.

Opposing the chopping down of the trees, Rohan Singh, secretary, Environment Society of India, said the decision of the UT Administration to cut down 39 trees to widen a road would impact the environment of the city. He said the UT Administration should try to avoid cutting down of the trees. “If they do not have an alternative, they should plant at least 10 saplings for every tree being chopped down in the city,” he said.

However, the work on the widening of the road had been started. After the completion of the work, people coming from the Zirakpur side would be able to reach Madhya Marg directly by avoiding the Tribune Chowk. They could take a right turn towards the Industrial Area from the Poultry Farm chowk.