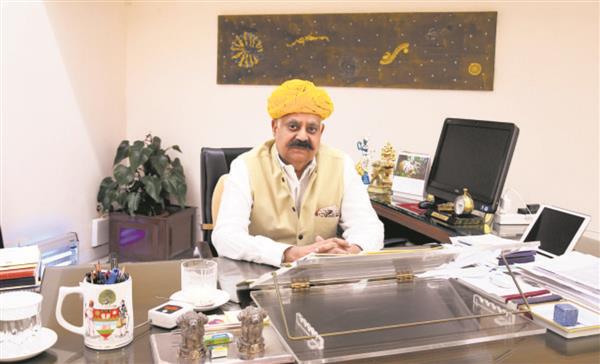 Promising to continue the good work done in the past to further improve the public delivery system, UT Administrator VP Singh Badnore, who is also the Governor of Punjab, spoke to Chandigarh Tribune on various issues, including fund crunch, being faced by the city in the wake of the Covid-19 pandemic.

This index measures the quality of governance. Due to consistent efforts, we could attain the first rank among UTs. The good work done in the past will be continued to further improve public delivery. The record and services in the Estate Office is also being digitised to ensure hassel-free, transparent and time-bound services to residents.

From day one after the Prime Minister announced the lockdown, the UT Administration geared itself and held meetings with officers of the tricity, heads of medical institutions and the deputy commissioners of Mohali and Panchkula. The UT implemented the following strategies to prevent a surge of the infection as chances of an increase in Covid transmission were anticipated after the festive season.

These efforts will be further strengthened if the situation so warrants.

As of now, there is no such plan. However, we are in touch with doctors, including those from the PGI. On their recommendations, we will go for a sero survey as and when it is required.

In addition to the regular tricity meeting on Covid-19, a tricity coordination committee has also been formed for other matters relating to law and order, and connectivity. Regular meetings are being held in this regard. Chandigarh has offices of both Punjab and Haryana governments as well. The norms for Covid appropriate behaviour at workplaces, markets and public places have to be followed by all visitors from the neighbouring states. Enforcement of traffic laws and Covid appropriate behaviour is relatively much better in Chandigarh. In meetings, we involve the Mohali and Panchkula administration and also the control rooms set up to combat the pandemic.

The elevated road project from the PGI to Sarangpur village is in the planning stage and has not been held up for want of funds. We have been getting adequate funds from the Centre for development works and we shall keep seeking funds for important projects and development in the city.

The Administration has taken up the matter regarding acceptance of recommendations of the Fourth Delhi Finance Commission pertaining to Chandigarh with the Centre and it is still under consideration. However, the allocation in the form of grant-in-aid has been consistently increased in the past three-four years for the MC and despite the financial constraints, this year it shall be ensured that no cut is imposed on the approved allocation for the MC. Only recently, two new petrol pumps, fully automated, have been inaugurated in the Industrial Area, Phase II, and Sector 51, Chandigarh. The MC is also looking for new avenues to generate funds in addition to the revenue generated from these petrol pumps.

There is no shortage of officers at the senior level in the Administration. Eight IAS officers, eight IPS officers and 17 PCS/HCS officers have been posed in the Administration as against nine sanctioned posts of IAS officer, six of IPS officer and 17 of PCS/HCS officer. Additionally, two IAS officers have been posted against ex-cadre IAS posts in Chandigarh. Further, the panels for the post of Finance Secretary, Chandigarh, and the Joint Secretary, Finance, have already been forwarded to the Centre.