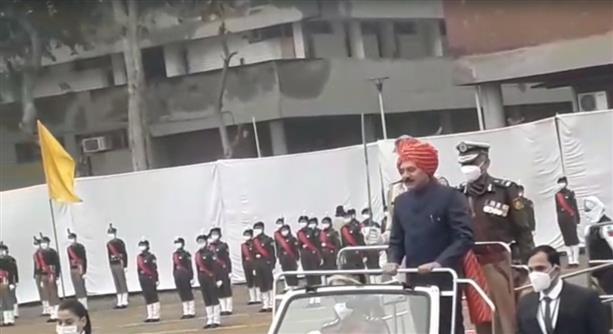 A video grab of UT Adviser Dharam Pal at the RD function in Chandigarh.

UT Adviser Dharam Pal on Wednesday said the Chandigarh administration had been working on making Chandigarh a regional hub for education, health, commerce and IT.

“We have been working on themes of Clean City, Green City and Smart City and making Chandigarh carbon neutral by 2030,” he said.

“Under the Clean City project, we have been working tirelessly to set up an improved system of waste management. As many as 524 twin-bin garbage collection vehicles have been put into service to collect segregated waste, while 622 SWM vehicles have been put on GPS tracking for better monitoring; two material recovery facility centres are functional and processing 200 tonnes of waste daily. The third MRF Centre will start its operations soon and thereafter 550-tonne waste will be scientifically managed,” he said.

“The sewage treatment plants of the city will be upgraded to follow most stringent parameters in country and make whole of treated water reusable for non-contact usages. The Construction and Demolition Waste Policy will be notified shortly.We have set ourselves a target of processing 100 per cent waste including construction and demolition waste by 2023.No un-processed waste will be allowed to go to the dumping site,” he added.

“To make the local service of CTU more reliable and punctual, Intelligent Transportation System has been implemented on 358 buses. This system enables the passengers to live track the buses; to know on real-time basis the departure and arrival times; access the top up smart card services. Smart Bus passes have been introduced to ease down the woes of passengers.

“To further pursue the Green City concept and to make Chandigarh a Model Solar City, the Administration has installed solar plants at 3,841 sites with 47 MW capacity. We intend to expand this capacity to 75 MW by August 2023, in line with our India@75 Campaign. To achieve this, a few unique projects such as 2 MWP Floating Solar Photovolantic (SPV) Power Plant at Water Works, Sector 39; 500 KW Floating SPV Power Plant alongwith Fountains at Dhanas Lake; 2 MWP Canal Top SPV Power Plant at Patiala Ki Rao and 2.4 MWP Canal Top SPV Power Plant at N-Choe are already in pipeline and are likely to be completed by August 15. These are remarkable initiatives under Climate Change Action Plan.

“In order to reduce carbon footprint and curtail the negative effect of emission, the UT Administration is making sincere efforts to popularise Zero Emission E-mobility. A comprehensive draft Electric Vehicle Policy is already prepared and will be put in public domain soon for all the stakeholders to send their views/suggestions before it is finalised.

“Under the Accessible India Campaign, the work has been initiated to make all the buildings accessible for challenged people.

“The Phase I of public bike sharing project has been completed with the rollout of 1,250 cycles at 155 stations. Almost 1,500 persons are taking daily rides. Under the next Phase, 1,250 more cycles, at 155 additional stations will be added by June 2022,” he said, adding, “With this we will emerge as the city hosting the largest public bike sharing system in the nation.”