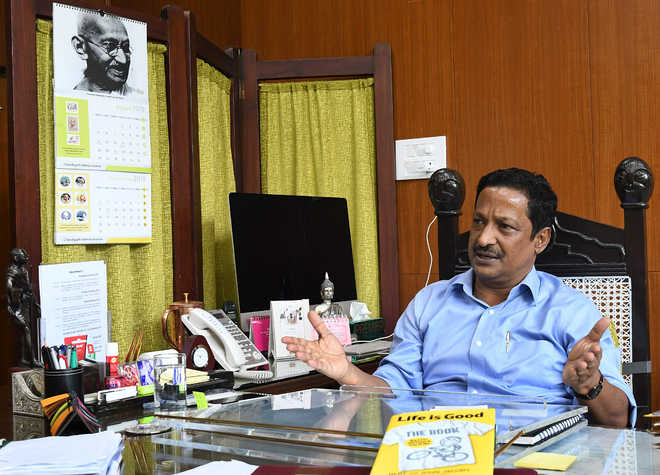 To sustain this title and for further improvements, 435 vehicles are being deployed in the city and Chandigarh will soon become a bin-free city, he added.

“I am extremely happy to share that with untiring efforts of the Chandigarh Administration and with the active cooperation of the people we have transformed Chandigarh into a model city of development and prosperity. When the rest of the country was under strict lockdown and residents could not go out to get essential items, it was only in Chandigarh that rations, milk and vegetables were home delivered in public transport buses,” he said.

Parida declared a public holiday in all educational institutions on January 27, as per previous practice.

When in many areas Covid patients were not able to get beds or rooms, in Chandigarh we had the adequate infrastructure to provide facilities not only to the residents but also to patients from other states, he said.

Under the leadership of Administrator VP Singh Badnore, decisions were taken to tackle every problem that cropped-up in fighting coronavirus. Screening at bus terminals, airports, railway stations, border areas, testing at multiple facilities ensured that Administration was always in control of the situation.

He said the administration was pulling out all stops to ensure that the saga of stupendous success continues unhindered with all-round development in every sphere aiming to benefit the society as a whole.

Under the dynamic leadership of Prime Minister Narendra Modi on January 16 the first phase of the Covid vaccination was rolled out all over the country. Chandigarh too set up 10 vaccination centres and administered vaccines on the priority basis to the healthcare and frontline workers. In the second phase, persons above 50 years of age and under-50 population groups with co-morbidities will have this benefit of vaccination on an optional basis, he said.

The rabies-free campaign has been kick-started by providing free of cost vaccination to all. All necessary steps have also been taken to control avian influenza (Bird Flu) in the city.

The pandemic has exposed the need to further equip schools with infrastructure and technologies, and provide teachers and students with the skills to adapt to a digital environment. The Construction of four new Government school buildings has been completed which will be made functional from the next academic session 2021-22. Online and offline mode of teaching was being followed to avoid loss of instructional time of students.

The much-awaited Public Bike-Sharing project has been initiated to encourage the citizens of the City to commute within the city aiming to reduce the carbon footprints of the city.

The key idea of a smart city is the synchronization of public services with an integrated public transport system. Information Technology, therefore, plays a crucial role in both integrating and automating these services. Smart cards will also be introduced soon which will enable commuters to travel cashless in CTU buses.

Certain new projects, like Mother and Child Care Centre at Sector-32, CTU Bus Depot-cum-Workshop in Raipur Kalan, Research Scholar Hostel at Punjab Engineering College, Subway between PGI and Punjab University, are coming up soon. To bring in greater efficiency in the power sector, the process of privatization of Electricity Wing of the Engineering Department has been initiated.

Three new modules have been added in e-beat book App viz. to increase the sense of security and safety amongst citizens.

To empower women by imparting them job-linked training, the police have initiated a programme under which 37 women received appointment letters after only a three-day training programme. Further, due to concerted efforts of Chandigarh Traffic Police and road engineering interventions by engineering wings, fatal road crashes have dropped by 51%.

“Let us all join hands and work together to make Chandigarh totally corona-free. We will be a role model, an ideal UT for the rest of the country to envy and emulate,” he added.