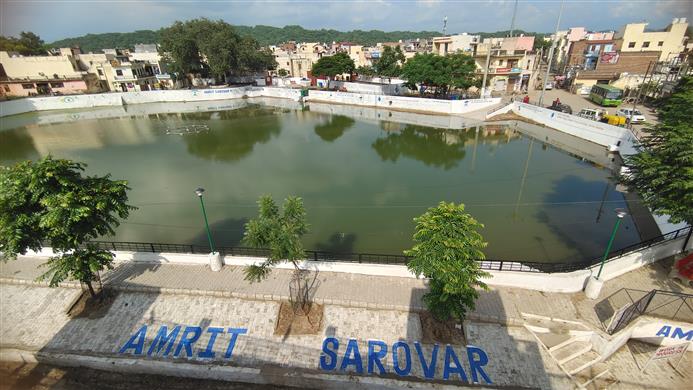 To promote environment and water conservation, UT’s first ‘Amrit Sarovar’ was unveiled at Kaimbwala village on Independence Day. Two more ponds will be set up at Khuda Ali Sher and Sarangpur soon.

Mayor Sarabjit Kaur Dhillon said Prime Minister Narendra Modi had launched the ‘Amrit Sarovar Mission’ as part of the ‘Azadi Ka Amrit Mahotsav’ celebrations to conserve water for future and set August 15, 2023, as the deadline. ‘Amrit Sarovar’ aims to develop and rejuvenate 75 water bodies in each district of India.

She said the sarovar would not only help protect environment and conserve water, but also draw visitors from nearby areas. Fountains, lighting and adequate seating arrangement had been provided at the sarovar.

“Earlier, people used to dig up ponds and ensure cleanliness. But with passage of time, these became polluted due to neglect. Gradually, waste from various sources started flowing into these ponds. The MC has stepped in to resolve this problem by rejuvenating city ponds into beautiful sarovars.”

MC Commissioner Anindita Mitra said each sarovar would be spread over around 1 acre with capacity to hold 10,000 cubic meters of water. “The focus of the mission is to ensure people’s participation. The MC has started work on rejuvenating other ponds, including at villages Sarangpur, Khuda Ali Sher,” she said.

Recharge mechanism had been developed separately for each sarovar, which would fill the pond up to a fixed level, she added. The sarovar was inaugurated by Banwarilal Purohit, Governor of Punjab and UT Administrator.