To serve show-cause notice on Chhabra for ‘anti-party activities’ 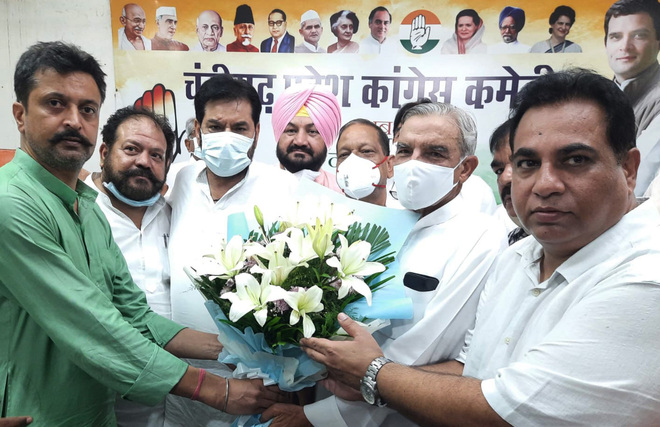 The city Congress today decided to serve a show-cause notice on former president Pardeep Chhabra for his “anti-party” activities.

At a meeting, which was attended by local unit president Subhash Chawla, former party MP Pawan Kumar Bansal and newly appointed office-bearers, it was resolved to serve a show-cause notice on him. “A senior member among the office-bearers proposed to serve a notice on him for his anti-party activities. Later, all members resolved the same,” said a senior party leader.

In an official statement, the Congress said, “The party took strong note of the recent actions of Chhabra wherein he has been openly criticising the party leadership, damaging its image and prospects. It was unanimously decided to condemn such anti-party activities and issue a show-cause notice to him.”

Party leaders said due process would be followed in this regard. If he still did not stop his activities, strict action will be initiated against him.

Earlier in the day, Chhabra, in a message to Chawla, showed his inability to attend the meeting due to “being busy in personal matters”. But, alongside he also attacked the local unit president for his previous statements. Chhabra has been attacking Chawla and Bansal since he was removed as party president in February this year. He has been alleging that he was not being called for party meetings and forums, and was being ignored.

However, Chawla has been maintaining that he was invited, but did not come. To throw the ball in Chhabra’s court, the party president on Tuesday invited the former for a meeting today and also kept proof of the invitation. However, he did not turn up.

He said all sections had been given due representation and appealed all to work for strengthening the party.

The party also decided to launch an agitation on the issues of water and garbage collection charges.

Bansal said, “The present BJP government is losing public support, both at the Centre and the city level. Prime Minister Narendra Modi is becoming unpopular because of his inept handling of various national issues. At the local level also, the BJP-led Municipal Corporation has failed on all fronts. The Congress stands a fair chance to win the municipal poll, to be held in December this year.”