Heaps of trash dot areas along seasonal rivulet in Punjab 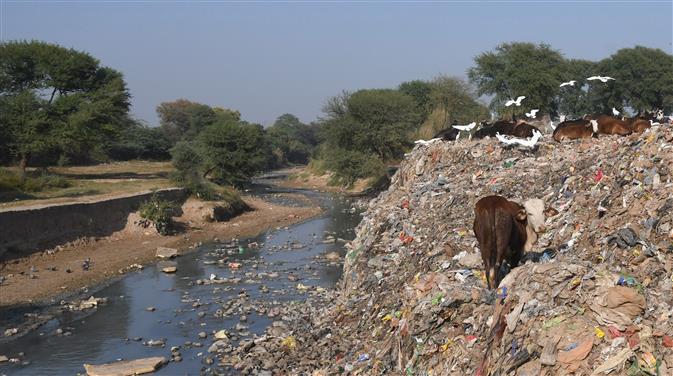 The seasonal Patiala ki Rao rivulet is gradually being wiped out of the city’s peripheral landscape, where it morphs into “ganda nullah” owing to haphazard dumping of garbage and unending discharge of sewage.

A visit to areas abutting the rivulet, including Nada and Nayagaon villages, reveals the scale of damage being done to the natural stream.

Mounds of garbage have been dumped near Janta Colony, Vikas Nagar, Ram Sharanam area along the rivulet. At several places, the practice of throwing garbage towards the choe has been going on unchecked for years.

Residents say trucks and tractor-trailers deposit garbage alongside a road crossing through the seasonal rivulet and a JCB machine levels it up after some days, covering it with a layer of soil.

Garbage is being dumped blatantly over past two-three years. As a result, the entire area is gradually turning into giant garbage dump. — Mange Ram, a Khuda Jassu resident

The Nayagaon MC has made temporary arrangements to segregate and dispose of garbage. Disposal has been outsourced to a private firm. — A PPCB official

“The practice was on earlier too, but garbage is being dumped blatantly over the past two-three years. As a result, the entire area is gradually turning into giant garbage dump,” says Mange Ram, a Khuda Jassu resident. Scattered garbage attracts stray cattle, which can be seen feeding on the mounds in open areas and along roads.

Local residents say a large number of sewage discharge outlets are present in the area, but these are not visible from the road. “Once you start walking along the choe bed, steady streams of sewage can clearly be seen. The water has now turned black,” says Sanjay, a Khuda Lahora resident.

Punjab Pollution Control Board (PPCB) officials say they have recently filed a compliance report to the committee. “The Nayagaon Municipal Council has made temporary arrangements to segregate and dispose of garbage. The garbage disposal has been outsourced to a private firm,” says an official.

Environmental activists say local residents, in violation of the National Green Tribunal (NGT) guidelines, have made illegal passages through the choe, between the Khuda Lahora and Nada bridges, to unauthorised housing societies across the rivulet.