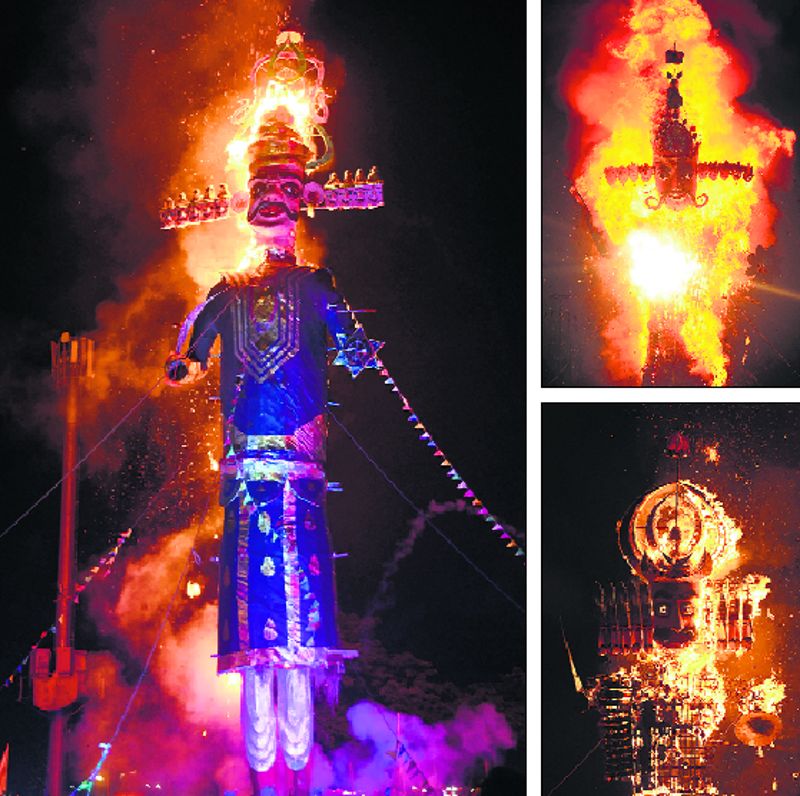 After two years of muted celebrations, Dasehra was celebrated with much fervour in different parts of the city.

Among the Ravan effigies burnt in several areas, the tallest (92 ft) went up in flames in Sector 46. An 85-ft effigy of Kumbhkaran was also set afire at the ground, while Meghnad’s 82-ft-tall effigy was burnt by some miscreants last night. A 12-minute laser show on Ramayan, a light-and-sound show, Ravan’s effigy placed on a chariot and its neck rotating 360 degrees were the highlights of the event at Sector 46, where MC Commissioner Anindita Mitra arrived as the chief guest.

A 75-ft Ravan effigy was set ablaze at Sector 29, while one that was burnt at the Sector 17 Parade Ground was 70 feet tall. Effigies were also burnt at Sectors 24, 49 and Ram Darbar. MP Kirron Kher was the chief guest at these venues. Light and sound shows were held at various places.

At the Sector 24 event, city Congress president HS Lucky shared the stage with Kher. Satya Pal Jain, ex-MP and Additional Solicitor General of India, was the chief guest at the Dasehra celebrations in Sector 43. UT DGP Praveer Ranjan also attended the event. Apart from sitting arrangements at the venues, people enjoyed the show from terrace of their homes, parks, roads and trees.

Meanwhile, massive jams were witnessed around the places where Dasehra events were organised. Parking was a major issue faced by people. They had a tough time leaving the place after the event concluded. Traffic was in a mess with not enough number of traffic cops in sight.

Events held at 3 places in P’kula

Panchkula: Dasehra was celebrated with a great pomp and show at three places on Wednesday. The event held at the Sector 5 Parade Ground was witnessed by around 50,000 people. The celebrations were also held at the Sector 15 ground and at old Panchkula. — TNS

Mohali: Dasehra was celebrated with fervour here on Wednesday. Punjab CM Bhagwant Mann and MLA Kulwant Singh attended a ceremony at the Dasehra ground in Phase 8. The CM announced the ground would be used solely for Dasehra celebrations and no commercial activity would be allowed. He said a notification would be issued soon. Security has been tightened in and around the town. — TNS