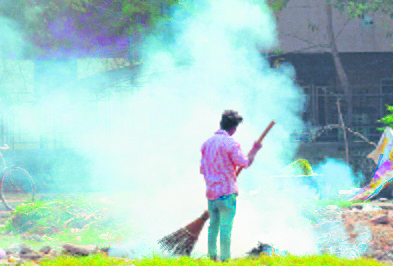 To improve the quality of air in the city, the Chandigarh Pollution Control Committee (CPCC) will soon receive Rs5 crore from the Centre.

The UT will launch solar-powered carts at Sukhna Lake on Friday. Debendra Dalai said two solar-powered carts would be pressed into service at the lake to ferry the elderly and disabled persons to the regulator end of the lake for birdwatching. He said the service would be free of cost and in place till migratory birds remained in the lake.

Debendra Dalai, Director (Environment) and Vice-Chairman, CPCC, said the Ministry of Environment, Forest and Climate Change had sanctioned the funds, which would be distributed among various agencies to improve the quality of air in the city.

Among other agencies, the Municipal Corporation will be allocated funds for purchasing road-sweeping machines and sprinklers. A part of the money would also be spent on creating awareness on environment, Dalai said.

To monitor the air quality of the city on a real-time basis, the CPCC will soon set up two more continuous ambient air-quality monitoring stations (CAAQMS). Dalai said an order had been placed for the procurement of two CAAQMS. Meanwhile, two more such stations would be set up later, he added.

The National Green Tribunal had directed the CPCC to assess the optimal number of stations required.

Considering the population, three manual and five CAAQMS have to be installed in the city as per the criteria of the Central Pollution Control Board. However, the city already has a CAAQMS in Sector 25. Five CAAQMS would be set up, he added.