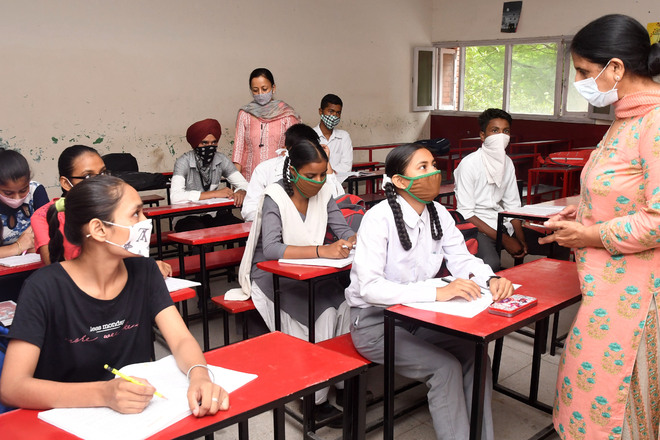 The principal addresses students at a government school at Phase 3B1 in Mohali. photo: Vicky

The Education Department organised a parent-teacher meeting today to take the consent of parents as schools reopened for Class X to XII following the announcement of the state government.

Thin attendance was witnessed in schools in Mohali district as only 30 per cent students of Class X to XII attended classes today. The schools opened after about four months. These were closed due to the second wave of the coronavirus in the state.

As compared to students, the number of parents was more, who wanted to see the arrangements made by the school authorities. The schools had made elaborate arrangements to ensure social distancing in the classes. Sanitisers were also made available.

Jasmeet Kaur, Principal, Government Senior Secondary School, Phase 3B1, Mohali, said the attendance was thin as only 30 per cent of the parents had given their consent for sending their wards to the school. She said many parents visited the school to meet teachers and to see the arrangements in view of Covid. She expressed the hope that the number of students would increase in the coming days.

District Education Officer (Secondary) Jarnail Singh Kaleke said all 46 secondary schools and 63 high schools opened in the district. He said they decided to organise a parent-teacher meeting to seek the consent of parents and added that the meeting He said though online classes would continue, they were hopeful that the physical presence of students in schools would go up in the coming days as parents expressed satisfaction over the arrangements made by the schools.

Gurdeep Kaur of Class XI said she was happy to attend the school after over four months, but was disappointed that her schoolmates were not in the school. She said opening of schools would help them in getting their doubts cleared, which was not possible while attending classes online. She hoped that her classmates would join her in the class soon.