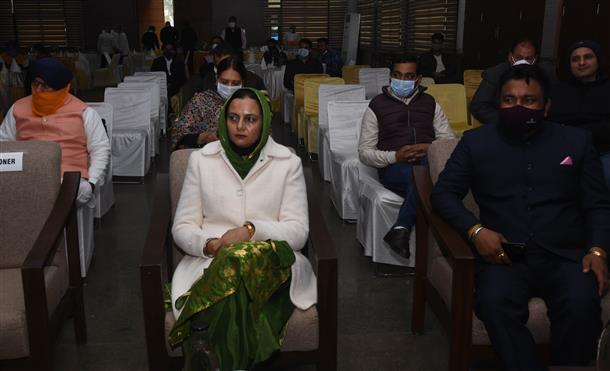 Mayor Sarabjit Kaur during a meeting at the Community Centre in Sector 38 (West), Chandigarh, on Wednesday. Photo: Vicky

A political slugfest erupted today after Congress and AAP councillors did not attend the first meeting called by Mayor Sarabjit Kaur to apprise the elected representatives of the functioning of the civic body.

MC Commissioner Anindita Mitra gave a presentation about the working and set-up of the corporation during the meeting and officers introduced themselves to the newly elected councillors.

The Mayor said of the 35 councillors, 29 were first-timers, thus such a session was vital for all of them. However, the Congress and AAP stayed away from the introductory meeting and criticised the move.

City AAP president Prem Garg said, “First of all, we do not recognise the Mayor as she was fraudulently elected and the invitation should have come from the Commissioner or Secretary. Secondly, the event should have been held in the MC building and not at the Community Centre, Sector 38 (West).”

City Congress president Subhash Chawla said, “Before calling any meeting, the Mayor should take all councillors into confidence. She is a ‘minority Mayor’. She should bring a common minimum programme of all parties. We are not here for the BJP agenda, but for the development of the city. The meeting should not have been held in a particular ward, but in the MC office or the UT Guest House.”

Mayor Sarabjit said, “Moving away from party lines, I tried to take councillors of all parties along. I called up each councillor. It’s always the Mayor who has been calling introductory meetings in the past. The meeting was called at the Community Centre in view of a surge in the Covid cases. I will keep trying my best to bring them along for the development of the city in future as well. Its up to them whether they want to be a part of development or politics.”

The development indicates that things are not going to be easy for the Mayor. Unlike last year when the BJP was in a majority, getting agenda items approved is going to be an uphill task this time.

BJP councillor Saurabh Joshi demanded that office and staff should be given to all councillors at community centres. He also demanded official vehicles for the Senior Deputy Mayor and the Deputy Mayor.

The MC Commissioner replied, “The office is already there. And for other things, the House has approved the agenda and it is lying pending with the UT Administration.”