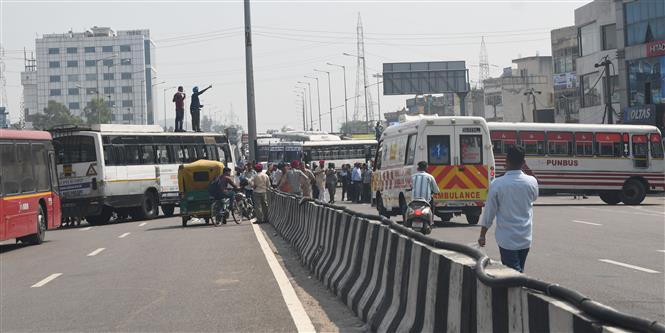 A large number of contractual employees of the Punjab Roadways, PUNBUS and the PEPSU Road Transport Corporation today staged a protest in Kharar by blocking the Chandigarh-Ropar highway near the flyover for over three hours from 11 am to 2:30 pm.

The protesting employees parked several buses and trucks on the highway to completely block the traffic near Desu Majra. There was chaos as motorists desperately tried to sneak through the serpentine queues of vehicles stretching to over 1 km.

Thousands of bus passengers, including women and elderly persons, were left stranded as roadways employees made them get off the vehicles near Desu Majra. The passengers had to walk for kilometres till Balongi to take alternative modes of transport.

A resident of Jalandhar, Jaswinder Kaur (42), and her 66-year-old mother, Baljit Kaur, had to walk for more than 3 km from Desu Majra to find a vehicle to reach the PGI for treatment.

The protesting employees are opposing the recruitment of outsourced employees. The government had reportedly gone back on its promise of regularising the existing contractual staff.

“We are being punished for no fault of ours. This is a sheer harassment of public,” she said. Heated arguments were exchanged between the public and the protesting employees.

Owing to the blockade, the main road in Kharar wore a deserted look. Members of employees’ unions raised slogans against the Transport Department and the Transport Minister. The police had made traffic diversions from the Mohali side near Balongi to ease the movement of vehicles.

The protesting employees were opposing the recruitment of outsourced employees. The government had reportedly gone back on its promise of regularising the existing contractual staff.

Around eight employees, who have been sacked by the department, climbed atop a water tank in protest. Police officials and Tehsildar Jaskaran Singh reached the spot and tried to resolve the situation.

The buses going to Punjab and HP were diverted through the New Chandigarh-Kurali-Ropar route to ease the traffic situation.