23-yr-old was on security duty at High Court 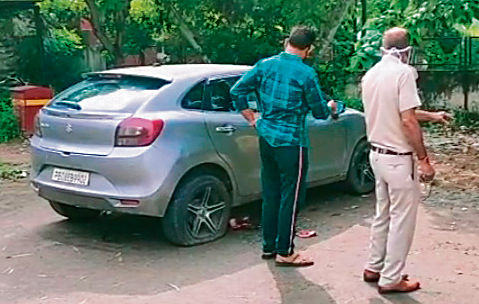 The car in which Constable Simranjit Singh took the extreme step.

A 23-year-old Punjab Police constable allegedly committed suicide by shooting himself with his service weapon in his car parked at Punjab MLA Hostel in Sector 4 here late on Friday night.

The victim, identified as Constable Simranjit Singh, a native of Jalandhar, shot himself with his 9 mm service pistol. The police said no suicide note was found at the spot. “The reason behind the step is yet to be established,” said a police official.

The police got the information about the incident at 2.33 am. Cops rushed the victim to the PGI in a PCR vehicle. He succumbed during treatment.

The police said the victim was on security duty at the Punjab and Haryana High Court. He was residing in the barracks at the MLA Hostel.

Head Constable Hardeep Singh of the Punjab Police, who was putting up in the barrack where the victim was staying, noticed that the constable was not in the barrack following which he started looking for him.

He found the victim on the front seat of his Baleno car with blood oozing out of his head. The car was locked from inside following which Hardeep informed the police. The rear windowpane of the car was smashed to unlock the car. The pistol with which the victim shot himself was found lying near the gear lever. The police seized the victim’s mobile phone, which was lying in the car.

Inquest proceedings have been initiated at the Sector 3 police station.