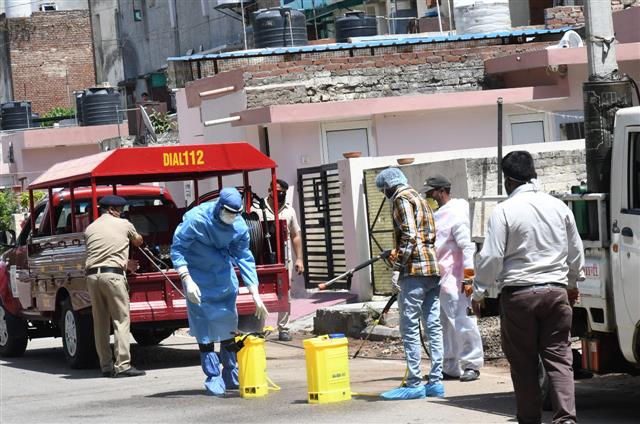 Sanitation workers use chemicals to disinfect the area in Sector 30 on Saturday. Tribune photo: Manoj Mahajan

The Chandigarh Administration on Wednesday approved to end the containment zone operations in Sector 38 and Sector 52.

Earlier, the Chandigarh Administration had declared six areas in the city as containment zones. With today's decision only three areas namely parts of  Sector 30 B, Kachi colony in Dhanas, Bapu Dham Colony and Shastri nagar in Mani Majra will now be containment zones.

As per the guidelines of the Central Government, a containment zone can be denotified only if no new Covid-19 case is reported from the locality for 28 days.

UT Adviser Manoj Parida had said: “Since in Chandigarh corona outbreak is scattered and not confined to a specific pocket, area, village or cluster, entire district has been declared as containment zone”.

What is a containment zone?

Ministry of Health and Family Welfare defines the containment zone as a specific geographical area where coronavirus cases are found.

The administration imposes strict restrictions on movements in such areas to prevent further spread. These zones are primarily aimed at mapping local transmission of the disease and prevent the contagion from spreading.