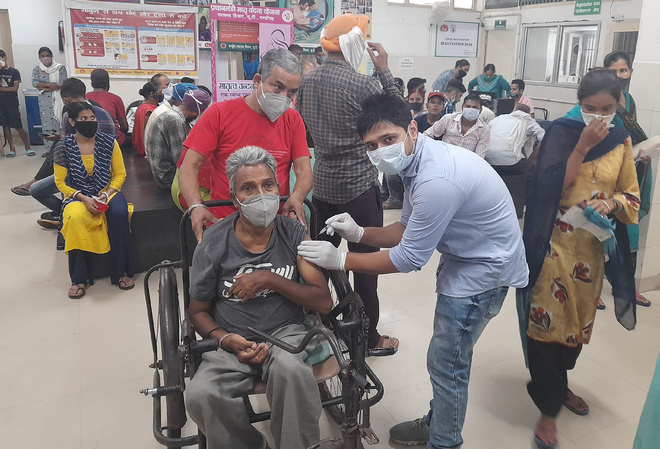 A differently abled man gets the vaccine at a health and wellness centre in Dadu Majra on Saturday. Pradeep Tewari

As per the Centre’s data, states that have attained 100 per cent coverage of eligible population with the first dose include Sikkim, Dadra and Nagar Haveli, and Himachal Pradesh. The states that have covered more than 85 per cent target population with the first dose include Tripura, Ladakh, Daman & Diu, Lakshadweep and Mizoram. Recently, Prime Minister Narendra Modi also hailed the efforts of the Himachal Pradesh Government in achieving the 100 per cent first dose target.

Meanwhile, UT Adviser Dharam Pal said: “The Centre has not included Chandigarh among states and Union Territories that have achieved 100 per cent target for first dose. This is because the base population for the 18-plus group of Chandigarh is not correct with the Central Government. We have raised this issue again with the Centre.” Chandigarh had completed the 100 per cent target for the first dose on August 14. Till now, the Union Territory’s first dose coverage stands at 112.93 per cent, as it has vaccinated 94,333 people more than the 18-plus target population of 7,28,822.