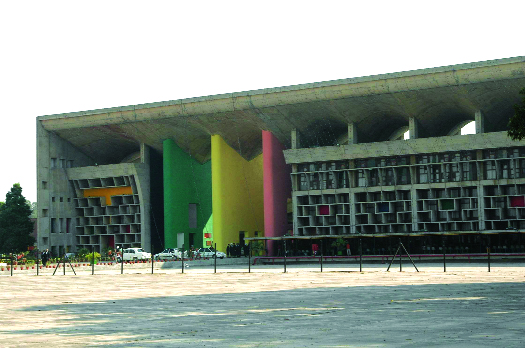 Justice delivery mechanism in Punjab and Haryana has plunged into crisis. More than 450 officers/officials, including 64 Judges in the subordinate judiciary, have tested positive for Covid in the two states and the high court in the Omicron-driven third wave.

Available information suggests over 200 court staffers and 50 judicial officers have tested positive in Punjab. In Haryana, the situation is grim with nearly 70 staffers and 14 judicial officers down with Covid. No less than 115 officers and officials of the Punjab and Haryana High Court have caught the virus to date.

The situation could have been worse but for timely action of switching over to restrictive functioning mode by the high court Chief Justice Ravi Shanker Jha and other Judges for itself and the new guidelines for the subordinate judiciary.

It is believed both high court and the PGI have the “heaviest footfall” in the city. The situation is even now being closely monitored by a special committee headed by Justice Ajay Tewari, which holds meetings on a weekly basis with the Bar members, among others, before submitting its recommendations to the Chief Justice

Amidst apprehensions of a third wave, the high court ordered virtual hearings a fortnight ago. An order issued by the high court on January 3 made it clear that the decision was taken following a sudden surge in Covid-19 cases in Punjab, Haryana and Chandigarh. The order followed the recommendation of the “special committee” in consultation with the Additional Solicitor-General, Punjab and Haryana Advocates-General, UT senior standing counsel, and public prosecutor. The order specified that hearing of the cases in the high court would be held through virtual mode/videoconferencing from January 5 and the present system of filing, listing, and mentioning of cases would continue as such.

The high court had initially shifted to the virtual mode of hearing in March 2020. Limited physical hearing was ordered to be resumed from February 8, 2021, but it had to be suspended as the second wave took in its grip High Court Judges, judicial officers in the subordinate judiciary, advocates, and the staff. The high court was forced to go back to restrictive functioning from April 19, last year.

Following a “massive surge” in cases, the functioning had to be restricted further from April 28, last year. But all Benches resumed functioning through the virtual mode from July 28, last year, with the reduction in the severity of the second wave. The high court decided to partially resume physical hearing of cases from September 6, last year. The number of Benches hearing cases physically increased gradually.