Only 4 hospitalised in city, none in Mohali, Panchkula

The tricity on Friday saw a spurt in Covid cases with the active case tally touching 276. Of the active cases in the tricity, only four patients are hospitalised in city hospitals, while no patient is admitted in Mohali or Panchkula.

A rise of 58 per cent has been observed in the daily cases in the tricity with 76 cases reported on Friday against 48 cases a day earlier.

Chandigarh witnessed 35 fresh Covid cases on Friday, taking the active caseload in the city to 152. The daily positivity rate stands at 2.57 per cent. While no fatality was reported, 19 persons recovered. The virus has claimed 1,165 lives in the city so far. The last Covid death was reported on February 26. — TNS

Mohali: After over three months, 22 fresh cases of Covid surfaced in the district in the past 24 hours, taking the tally to 96,126, while four patients were cured of the disease. Before this, 17 Covid cases were reported on March 4. No new death due to the virus was reported on Friday. There are now 77 active cases with 1,149 deaths in the district. — TNS

Panchkula: Nineteen fresh cases of Covid surfaced in the district in the past 24 hours, taking the tally to 44,425. No new death due to the virus was reported during this period. Of the 44,425 cases reported from the district so far, 43,964 patients have been cured. There are now 47 active cases with 414 deaths. —TNS 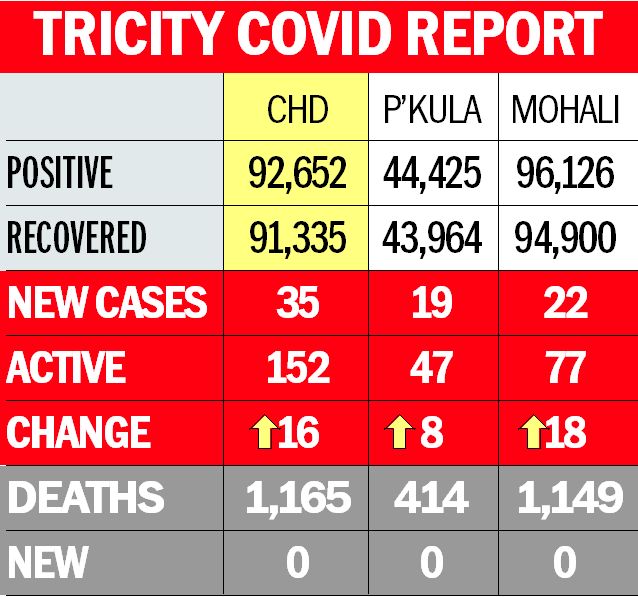