No permission sought from SDM for function; other violations galore 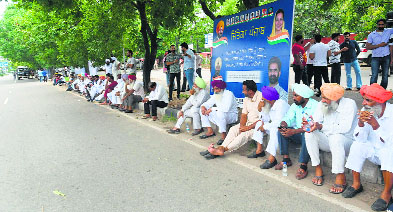 Covid norms went for a toss at the Punjab Congress Bhawan in Sector 15, where thousands of party supporters reached from different parts of Punjab to witness the installation ceremony of Navjot Singh Sidhu as the Punjab Pradesh Congress Committee (PPCC) chief.

Traffic snarls in vicinity of venue

A case under Section 188 of the IPC and Section 51-B of the Disaster Management Act has been registered against unknown persons. - DSP Ram Gopal, spokesperson, UT Police

Driving or parking a vehicle on a cycle track is an offence in the UT. However, Congress men were seemingly given a special privilege by allowing them to park their vehicles on the cycle track.

No permission was sought from the SDM (Central) for the function, which was held in violation of Sections 51 to 60 of the Disaster Management Act, 2005, and Section 188 of the IPC.

While around 4,000 persons were present inside the bhawan, thousands stood outside to mark their presence.

Harjeet Singh Sandhu, SDM (Central), said no permission was taken from his office to hold the event.

These days, permission for a gathering is given for 200 persons or 50 per cent of the capacity of the venue, whichever is less.

A UT official, not wishing to be named, said this was a breach of the DM’s order and invited action under the Disaster Management Act and Section 188 (disobedience to an order duly promulgated by a public servant) of the IPC.

The Covid protocol was blatantly violated by a large number of people, who were not wearing a mask. Social distancing was also given a miss. The police, who are responsible for getting Covid norms complied with, remained a mute spectator. Not even a single challan was issued for not wearing a mask.

The police also allowed parking of vehicles on cycle tracks, which was yet another offence.

A police official said everyone was busy managing the crowd following which no challan could be issued. In the evening, the police registered a case against unknown persons under Section 188 of the IPC and Section 51-B of the Disaster Management Act, 2005, at the Sector 11 police station.

The event also led to traffic snarls in Sector 15 and surrounding sectors. Traffic diversions at the PGI and the GMSH, Sector 16, roundabouts led to traffic jams in neighbouring sectors, including the dividing roads of Sector 10, 11, 14, 16, 17 and 24.