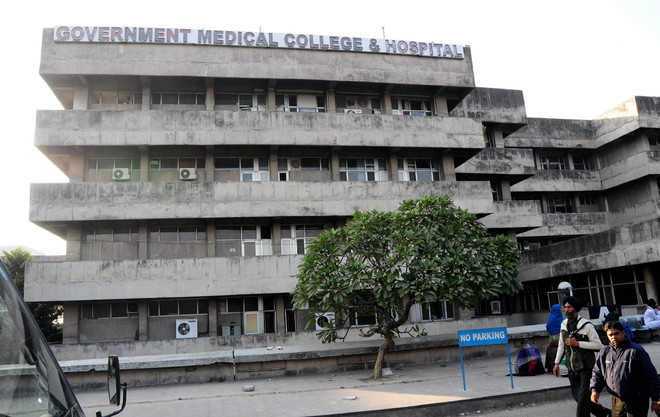 A 62-year-old Covid patient reportedly committed suicide by jumping from the fifth floor, that has an isolation area, at the Government Medical College and Hospital (GMCH), Sector 32, this morning.

The victim, identified as Chunni Lal, a resident of Sector 55, called one of his sons, Deepak, around an hour before taking the extreme step to inform him that he was having a problem in breathing and nobody was taking care of him at the hospital. He asked his son to take him from the hospital. The call was recorded by the victim’s son.

An inquiry has been marked into the case. The patient was not very sick due to Covid and was to be shifted to Sood Dharamshala. A nursing officer tried to stop him as she saw him leaving the room. After the staff raised the alarm, the man started walking faster. One of our safai karamcharis also tried to save him. — Ravi Gupta, MS, GMCH

The victim jumped from the hospital building around 7.25 am after which security guards shifted him to the minor surgery OT with multiple fractures and a head injury, where he succumbed to the injuries and was declared dead at 8.05 am.

Had tested positive on July 28

According to the UT Administration, the victim was earlier shifted to Sood Dharamshala, Sector 22, a Covid care centre, on July 28 after getting diagnosed positive for the virus. However, he developed breathlessness and was shifted back to the GMCH, Sector 32, where he was administered oxygen.

His relative Narayan Prasad said Chunni Lal had called his son and told him that he would die as he could not breathe properly. “The victim told his son Deepak that nobody was looking after him and he would soon die. He also revealed that he was having a problem in breathing,” Prasad said.

Meanwhile, Ravi Gupta, Medical Superintendent of the GMCH, said, “An inquiry has been marked into the case. The patient was not very sick due to Covid and was to be shifted to Sood Dharamshala after a proper examination. This morning, a nursing officer tried to stop him as she saw him leaving the room. After the staff raised the alarm, the man started walking faster. One of our safai karamcharis also tried to save him. These facts have come to light in the preliminary inquiry.”

Prasad said when the victim was at the quarantine centre in Sector 22, he had received several calls from the victim to inform him that nobody was taking care of him.

The victim was a painter and is survived by five sons.

The police said they had not received any complaint from the victim’s family. According to the UT Administration, the victim was a reformed smoker and was having a comorbid condition of chronic obstructive pulmonary disease (COPD). His cause of death was cardio-pulmonary arrest and hypo-volemic shock. His two family contacts have also been reported positive.

What the hospital says

The GMCH authorities issued a statement after the incident stating that the victim was a reformed smoker for 20 years and was referred from Sood Dharamshala on July 30 evening with a complaint of shortness of breath. On admission, the patient was conscious and oriented, and his vitals were checked. The patient was assessed and nebulisation given along with continued oxygen support and supportive management. All routine blood investigations, including Covid profile markers, were sent. The patient was currently stable, maintaining a saturation of oxygen by venturi mask with no other complaints.