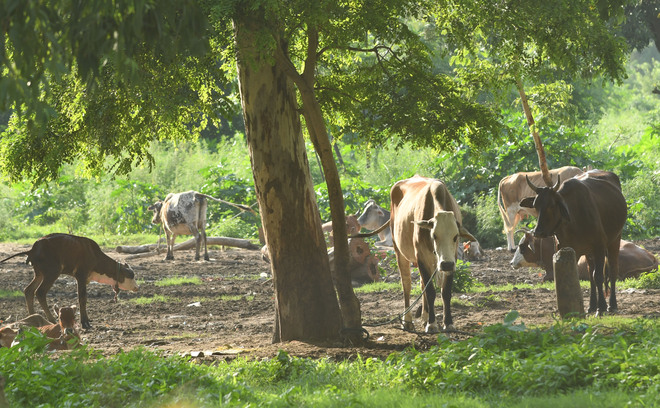 While the city Municipal Corporation has earned about Rs7 crore on account of cow cess, there is no respite to residents from the stray cattle menace, especially in the southern sectors and areas on the periphery.

We have informed the MC officials several times, but no action has been taken against those illegally rearing cattle. They work hand in glove with the officials concerned. - Jaspreet Singh, member, RWA, Housing Board Colony, Sec 52

We recently changed our field teams and people will soon see results. Neighbouring cities let loose their cattle for grazing in the UT. If there is a complaint about the involvement of local persons, we will look into that. — Dr Amrit Pal Warring, MOH, MC

Stray cattle roaming on roads pose a risk to motorists, especially in the evening hours.

One can see cattle entering the city from peripheral areas such as Faida and Jagatpura in the evening. Residents and councillors said the stray cattle also included the ones reared by local residents. People, after milking these cattle, leave them on the city roads at night.

A number of persons are rearing cattle in the forest area of Sector 52 with the alleged connivance of MC officials. The rearing of cattle is banned in the city except for the milk colony, Dhanas.

Jaspreet Singh, a member of the RWA, Housing Board Colony, Sector 52, said: “We have informed MC officials several times, but no action has been taken against those illegally rearing cattle. They work hand in glove with officials concerned.”

“My father met with an accident involving a stray animal. A car first hit an animal on the main road and then rammed into my father’s car. Luckily, he escaped unhurt. However, accidents due to stray cattle on roads are a common sight in this area,” he added.

Kamaljit Singh, president of a society in Sector 52, said: “People of the neighbouring colony are rearing cattle. After milking them, they leave them on roads, which causes road accidents and disrupts the flow of traffic.”

Chandigarh Tribune checked the spot in Sector 52 in the evening and found goats and cows tied there and people milking them. It all goes on unabated under the nose of the MC. There is a provision for imposing a fine of Rs20,000 on such violators, but there hardly seems any implementation on the ground. The MC has no latest data of such challans.

Councillor Shakti Prakash Devshali, who has been raising the issue in the MC House, said: “How is it possible that everybody knows where these cows come from and where are these reared but the officials concerned have no knowledge of it? They must act tough and should not release cattle after challaning erring persons. Rearing cattle in areas other than the milk colony is banned here.”

Opposition leader Devinder Singh Babla said: “When the MC started collecting cow cess, it was claimed that it would be used for the welfare of the cattle and deal with stray menace. However, despite crores being collected, the situation has not changed.”

Meanwhile, MC officials said they were going to spend Rs7 crore on the construction of a gaushala and a cattle pound at Raipur Kalan, and on other related purposes.