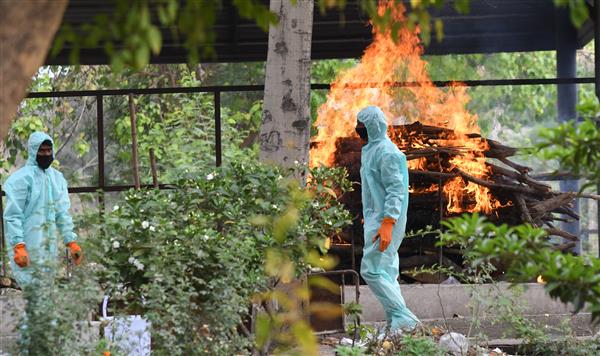 A preliminary inquiry conducted by Joint Commissioner Vinesh Kumar into allegations of misappropriation of funds for cremation of persons who died of Covid has put forth shocking revelations, including a finding that safai karamcharis and some MC officials involved in the cremations claimed money for conducting the funeral of over 900 victims though only 377 were reported as Covid deaths back then.

The Urban Local Bodies Department, Haryana, had announced that Rs2,000 would be paid to every safai karamchari of the five-member team for cremation of each Covid victim.

According to the inquiry findings, 14 safai karamcharis were made a payment of Rs31.34 lakh on September 29 last year for cremations. According to the report, Rs20.72 lakh of the total amount was transferred inappropriately, adding that then Chief Sanitary Inspector Madan Lal was also transferred money despite his role being confined to supervision of cremations as in-charge. Pending payments, for which claims were made, were put on hold after an inquiry was marked into the matter.

Those found guilty in the inquiry included assistant sanitary inspectors Ajay Sood and Satbir, safai karamcharis Sonu, Parvesh Kumar and Gulab, besides Madan Lal, the report mentioned. In the report, the Joint Commissioner also stated that pujaris at the cremation ground informed that only three-four safai karamcharis used to cremate bodies of Covid patients regularly. “On some occasions, just a single person conducted the funeral,” stated the report.

The report also raised a question on the constitution of a 10-member committee of safai karamcharis for cremation of bodies that put a financial burden on the state exchequer. “If only 10 people were assigned for cremations, how is it possible that funds were diverted into accounts of 14 people? How can the accounts department verify these bills?”

The report further stated, “When the data on cremations was verified from the MC, it was found that some deaths termed to have occurred due to Covid were actually natural deaths.”

On the basis of prima facie evidence, the Joint Commissioner suggested legal action be taken against the accused and funds recovered from them.

Haryana Speaker and local MLA Gian Chand Gupta said he had ordered the MC Commissioner to ensure recovery of funds inappropriately transferred into accounts of safai karamcharis and officials and take legal action.

The complainant, Dev Raj of the Panchkula Vikas Manch, said the matter had come to his knowledge after some safai karamcharis who conducted the last rites of Covid victims approached him and claimed that they didn’t get paid for the service. He then approached the MC Commissioner, who further asked the Joint Commissioner to conduct a probe into the matter. A complaint was also made to the Urban Local Bodies Department.

Against 377 deaths then, funds claimed for over 900 bodies

However, all accused have denied charges, saying they just followed government orders and committed no fraud.