Install barricades, CCTVs at entry-exit points | Assist cops in keeping vigil | All but one gate to stay shut at night 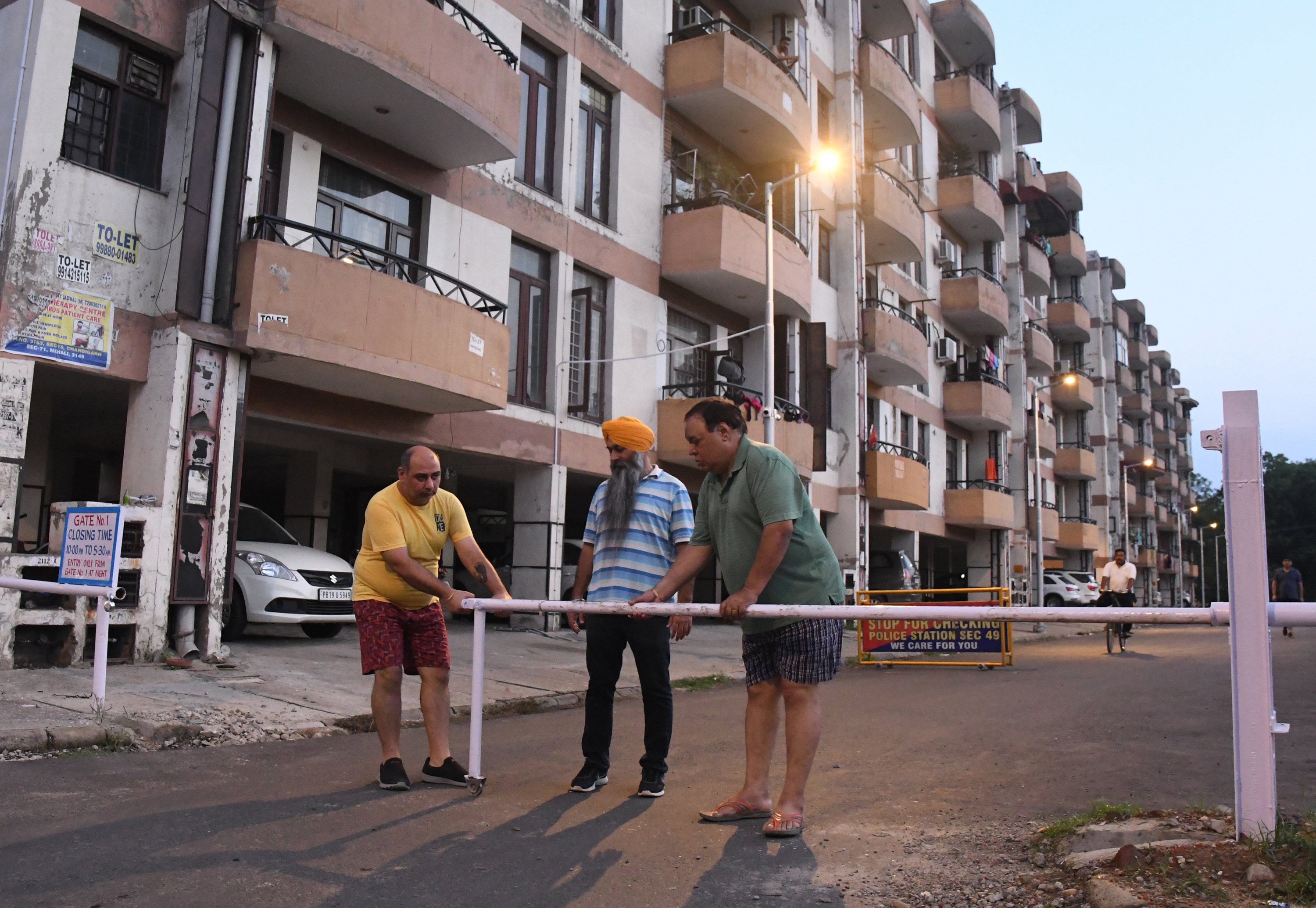 A barricade being installed at a society in Sector 63, Chandigarh, and (right) a board notifying gate timings. NITIN MITTAL

In the wake of vehicle thefts and nefarious activities, three residents’ welfare associations (RWAs) of the CHB flats, Sector 63, have joined hands to start ‘community policing’. They have set up barricades and installed CCTV cameras at the entry-exit points. RWA members, along with guards and the police, keep a vigil at the entry gates at night hours.

“About 15-20 two-wheelers have been lifted in the past one year. Tyres of four-wheelers have also been stolen. Besides, we believe nefarious activities like drugs supply and prostitution are going on in some rented flats. A number of property dealers have opened their offices here,” lamented Sameer Chaku, executive member of RWA (3BHK flats), Sector 63.

“That is why, the RWAs of EWS, 1BHK and 3BHK flats have started community policing. We sit with cops at the entry gates and also assist them in patrolling. Yesterday, 30-40 cars which were about to enter our society, did not come, which hinted at something fishy,” he shared.

Paramvir Singh Benipal, president, RWA (3BHK flats), said, “In one flat, 8-10 boys or girls are putting up. Many of them drink and play loud music at night, creating trouble for families living here. New tenants’ checking into the flats should be brought into the knowledge of RWAs.”

Ashwani Kumar Dhiman, president, RWA (1 BHK flats), and Yash Paul, president (EWS flats), said there was no check on illegal activities in rented and PG accommodations. “One of the hindrances is that it takes six months for tenant verification forms submitted at e-Sampark centres to reach police stations. We are also writing to the UT Administration to expedite the process of demarcation as the premises is open from several sides,” added Chaku.

He said they had barricaded all entries, except for the front gate, which is stay open from 10 pm to 5.30 am. RWA members said they would request the police to set up drunken driving naka on Friday, Saturday and Sunday.

About 15-20 two-wheelers have been stolen in the past one year. Tyres of four-wheelers have also been stolen. Besides, we believe nefarious activities like drugs supply and prostitution are going on in some rented flats. — Sameer Chaku, executive member, RWA (3BHK flats), Sector 63