Had sent consignment to Australia three months ago 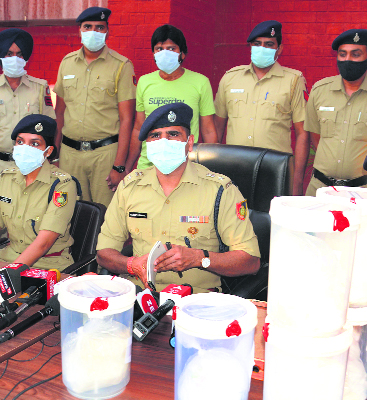 Chennai resident Ashfaq Rahman (36) had also sent a drug consignment concealed in healthcare products from Chandigarh to Australia through a courier around three months ago.

Chennai resident Ashfaq Rahman (36), who was arrested on Thursday, has revealed the name of another Chennai-based person, saying that he had handed over the cocaine consignment to him. He was produced in a court and remanded in 10-day police custody.

Rahman, who was arrested yesterday, has revealed the name of another Chennai-based person, saying that he had handed over the 10.24-kg cocaine consignment to him. He was produced in a court today and remanded in 10-day police custody.

A cop said the suspect had sent drugs to Australia three months ago as well through a courier company in Sector 22. However, it was sent to a person with a different name. “We are verifying from the company as to how much the courier weighed and on which address it was sent. We will also check if the suspect had visited the courier office alone and the identity used to send the courier abroad,” said a cop.

A police team will soon leave for Chennai to trace the man who had reportedly handed over the consignment to the suspect. “His arrest will further provide information about people involved in this deep-rooted international drug racket,” said the official.

During interrogation, the suspect revealed that he was supposed to get Rs5 lakh for the job. The police are also trying to trace the Ludhiana resident on whose identity the suspect was trying to send the courier to Australia.

Yesterday, the suspect had visited a courier company to send the courier, which included crockery items. While checking the items, staff of the company got suspicious on finding the trays heavier than expected. They noticed a cavity under the trays and found some packets containing cocaine hidden there after which the police were informed. — TNS