Chandigarh recorded a minimum of 4.3 degrees to Shimla's 4.4 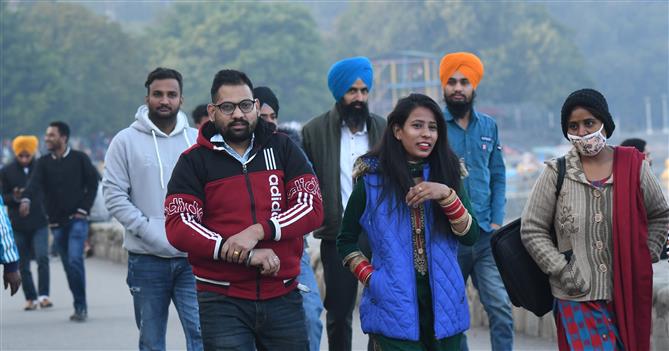 Chandigarh, Amritsar, Karnal and national capital Delhi were colder than 'Queen of Hills' Shimla on Saturday.

Likewise, many places in the plains of north India such as Ludhiana, Patiala and Hisar were colder than the popular hill station, the Met office in Shimla said.

Chandigarh, located in the Shivalik foothills, recorded a minimum temperature at 4.3 degrees Celsius, while Shimla, located around 7,000 feet above sea level, saw a low of 4.4 degrees Celsius.

Hill stations across Himachal Pradesh have been experiencing long hours of sunny weather for the past few days, while the plains are largely foggy. The maximum temperature in Shimla is hovering around 13 degrees Celsius.

Manmohan Singh, director of Shimla's Meteorological Office, told IANS that the Himachal capital is witnessing high night temperatures compared to the plains. "This is a normal phenomenon and occurs mainly due to settling of inversion layer on mountain tops," he said.

Generally, the air becomes cooler as elevation increases. The warm air lifted from the plains overlaid the existing cold air in the mountains. Singh said since Shimla is near the plains, the impact of inversion layer is more there. However, the picturesque tourist resort of Manali was in the grip of bone-chilling minus one degree Celsius.

At minus 12.1 degrees Celsius, Keylong in Lahaul-Spiti district was the coldest place in Himachal Pradesh.

The weather in Himachal's popular destinations like Kasauli, Chail, Kufri, Narkanda and Palampur is expected to be sunny till December 31.

"It is really pleasant in Shimla owing to long sunny days," Ritika Bhatnagar, a tourist from Delhi, said. Her husband Nakul added: "Even the nights are cosy." The weatherman said this trend would continue in the hills till the western disturbances -- storm systems originating from the Caspian Sea and moving across the Afghanistan-Pakistan region -- become active in the region.

"There is no chance of rain in the entire region till December 31," Singh added.