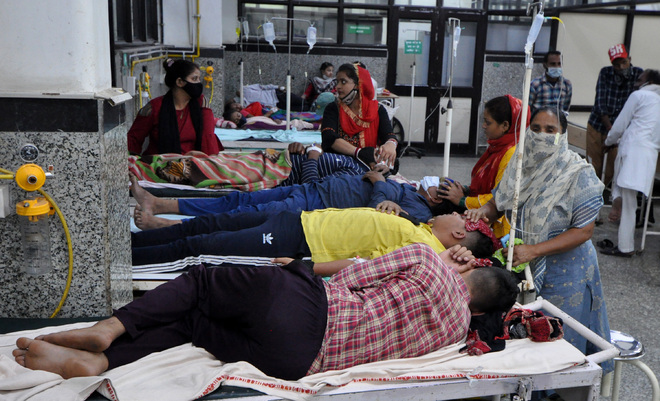 Dengue cases have been reported from Panchkula too. Patients at the emergency ward of the Civil Hospital, Sector 6. RAVI KUMAR

While 344 cases and two deaths surfaced in September, 1,304 cases and 12 deaths have surfaced this month. As many as 438 persons have tested positive for the vector-borne disease in the past five days only. A total of 56 samples were taken for dengue test today and 26 of these tested positive.

According to sources in the Health Department, the number of dengue cases could be much higher as the government hospitals, including the civil hospitals in Phase 6, Dera Bassi and Kharar, were facing shortage of testing kits to detect the vector-borne disease. The patients have been forced to turn to private hospitals, who charge between Rs800 and Rs1,000 per test.

As per norms, the department only considers test reports by a government lab and then carries out an insecticide spray in the patient’s house. All private hospitals and labs need to report any suspected or confirmed dengue case to the Health Department for remedial measures.

While confirming the shortage of testing kits, Civil Surgeon Dr Adarshpal Kaur said the scarcity was not only in Mohali but in entire Punjab. She said they had sent the demand and were expecting to receive the testing kits by tomorrow.

Dr Adarshpal Kaur said they were facing an alarming situation as the maximum number of cases was surfacing from urban areas such as Phases 3B1, 4 and 5, Zirakpur, Dera Bassi and Kurali. She said anti-dengue drives had been started and the number of anti-larvae teams increased. However, they need cooperation of residents, who need to take vector-control measures at their houses, she said.