Residents blame closing of drain by ‘politician’ for wall collapse 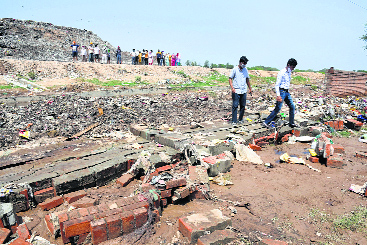 The wall of the Dadu Majra dump that collapsed during the rain on Friday night. Photo: Pradeep Tewari

Local councillor and Deputy Mayor Farmila said: “It seems to be a mischief by someone. It can also be an act of the Opposition.” She claimed that the pipe carrying dirty water was closed following local people’s demand, and not on behalf of a politician.

“It was at 3 am when the wall collapsed with a thud. Some thought there was some earthquake. But after they came out of their houses, they saw dirty water accumulated in the street. Foul smell and unhygienic condition gave them a sleepless night,” shared Dyal Krishan, a local resident.

“Recently, a local politician got the drain pipe at the dump closed as water entered his area. This led to the accumulation of dirty water near the wall. During the rain last night, the wall collapsed all of a sudden,” he alleged.

Harjinder Singh, chairman, RWA, Dadu Majra, said: “Dirty water accumulated in the street has led to unhygienic conditions. Recently, two persons died due to cancer and breathlessness. Their houses fall right near the boundary wall. We are not being heard even as we are facing several health problems such as asthma, TB, lung disease and other respiratory diseases due to the inhaling of this poisonous gas emanating from the waste.”

He said the local residents staged a protest today, following which a contractor of the MC visited the spot and started repairs in the afternoon.

Local councillor and Deputy Mayor Farmila said: “I visited the area and got the repairs started. Besides, on Monday, a tender regarding the construction of a 15-foot boundary wall around the dumping ground will be floated under the Smart City project.”