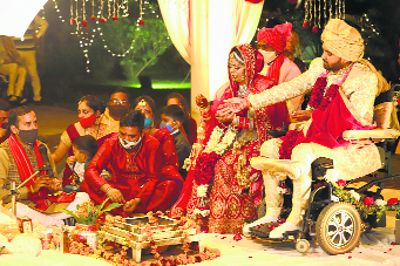 Can there be a better gift than tying the nuptial knot with the one you love on your birthday? Of course not, says Rahul, a quadriplegic, who got married to Anamika, an able-bodied woman.

Chandigarh Spinal Rehab, Sector 28, was buzzing with activity as its inmate Rahul got married on his birthday today. For Anamika and Rahul, convincing their kin for the wedding was a Herculean task. Rahul taking ‘pheras’ on his wheelchair with an emotionally charged Anamika following him, taking vows to take care of him as she has been doing since forever, was a sight to behold.

Their love story is indeed awe-inspiring. The couple, Rahul Singh Diwakar and Anamika Bhartiya, both 29, know each other since 2000, when they were playmates in the neighbourhood in Fatehgarh. It was in 2008 that they started developing feelings for each other.

Rahul shares their journey — one of love, trauma, and love being a balm for the scars left by the trauma. He says: “I always used to see Anamika before leaving for any work, but on that fateful day (March 13, 2016), I was in a hurry and didn’t meet her. I was going to appear for the AAO exam and was riding pillion on a bike when the vehicle skidded on a road and I suffered injuries on my back. I was taken to a hospital by my friends, but I wasn’t aware of what lay ahead in life.”

Rahul, while talking about the strong bond between him and Anamika, says: “Even though the lower half of my body was completely paralysed, it made no difference to Anamika’s love for me. My father was in the Army and mother and sister were teachers. I was often alone at home and Anamika would take care of me until the family members came back in the evening.” This went on for three months before his father was transferred and Rahul and his family shifted to Lucknow in 2018.

“I used to talk to Rahul for several hours on the phone daily as he was depressed,” says Anamika. She lost both her parents six years ago.

The wedding was hosted by Chandigarh Spinal Rehab.