Found in 22 pc samples sent by the institute 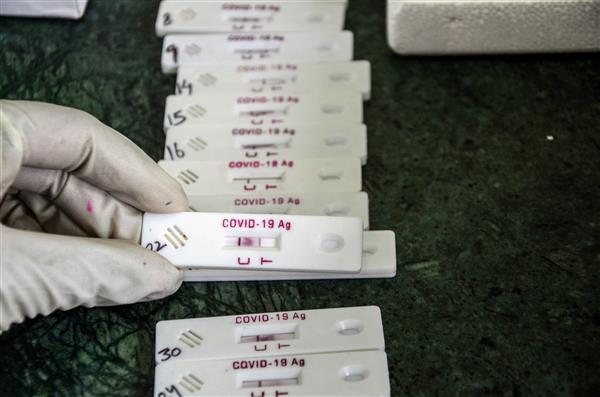 The PGIMER on Sunday confirmed that the presence of the double mutant B.1.617 variant was behind the second wave in the region after the reports of sequencing of SARS-CoV-2 samples sent by the institute came from National Centre for Disease Control, New Delhi.

“Reports of sequencing of SARS-CoV-2 from twenty-three nasopharyngeal swab samples of Covid-19 patients sent from PGIMER, Chandigarh, were received on May 13 from NCDC, New Delhi. Presence of the double mutant B.1.617 variant having the signature mutations L452R and E484Q has been confirmed in 22 per cent (5/23) of the samples after sequencing,” PGIMER Director Jagat Ram said today.

The Director further stated that the B.1.617 variant first identified in India last year has been found in more than 40 countries and has recently been classified as a “variant of concern” (VOC) by World Health Organization (WHO). It has been found by researchers that the mutations in the double-mutant strain render it to be more transmissible and vaccine induced antibodies are somewhat less potent in neutralising this variant.

“The surge of cases during the second wave of Covid-19 pandemic has somewhat been attributed to the B.1.617 variant strain,” Jagat Ram added.

Detailing further on the findings, he said, “Of the other samples, the UK variant B.1.1.7 which is also a VOC and associated with higher transmissibility was found in 39 per cent (9/23) samples. The UK variant B.1.1.7 carries the signature mutations N501Y, P681H, 69/70 Del. The rest of the samples carry the P681R mutation in the spike protein of the SARS-CoV-2 virus.”