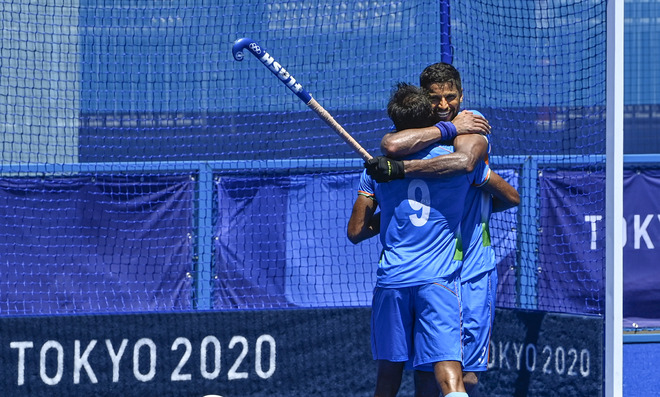 “We can’t repay for what we have learnt at the Chandigarh Hockey Academy (CHA), but it’s now time to see what the UT Administration does for us,” said Gurjant Singh, a former trainee of the CHA and striker of the Indian hockey team, which won a historic bronze medal at the Tokyo Olympics, while talking to Chandigarh Tribune from the venue of the games.

Two former trainees of the CHA — Gurjant Singh and Rupinder Pal Singh — played a vital role in the Indian team’s bronze medal win. “We have said it earlier also. We started learning our basics of the sport at the CHA. Whatever the CHA gave us, we can’t repay. Not only us, the academy has produced several international hockey players. Now, it’s time for the UT Administration to decide how it appreciates our efforts and hard work,” said Gurjant. When told that the Punjab Government had already announced a cash reward of Rs1 crore for each player (from Punjab) and whether they would shift to Chandigarh if the UT Administration doubled the prize money or gave more than the amount, Gurjant said, “We will see after the announcement.”

#Striker Gurjant Singh’s exceptional skills on the field and determination inspire every youth to excel in sports. His contribution to the team and Indian Hockey is indelible. Best wishes to him for his future endeavours. #Tokyo2020

This is an amazing feeling. We are happy. The aim was always to win a medal for the nation. We did it and we are happy about it. There’s no doubt that the entire squad played like a unit. This is a dream come true and the entire country is celebrating and so are we.Rs Gurjant Singh, ex-CHA trainee & Indian hockey team striker

He appreciated the entire team’s efforts and maintained that this win would change the perspective of the nation towards hockey. “This is an amazing feeling. We are happy. The aim was always to win a medal for the nation. We did it and we are happy about it. There’s no doubt that the entire squad played like a unit. This is a dream come true and the entire country is celebrating and so are we,” said Gurjant.

Meanwhile, city hockey lovers were immersed in joy with the historic win. Since state-run academies are closed owing to the Covid pandemic, the celebrations were restricted to the online mode. “Both (Rupinder and Gurjant) had a long association with the CHA. Despite facing odds, they practised well and achieved excellence. They have won many tournaments together and achieved laurels at various stages,” said Gurinder Singh, coach, CHA. Rupinder’s mentor and former CHA hockey coach Jasbir Singh Bajwa had died in 2011. However, he still remembers him as one of the finest coaches. “The Indian hockey team created history after winning the bronze medal. We at Hockey Chandigarh congratulate each and every member of the team,” said Anil Vohra, general secretary, Hockey Chandigarh.