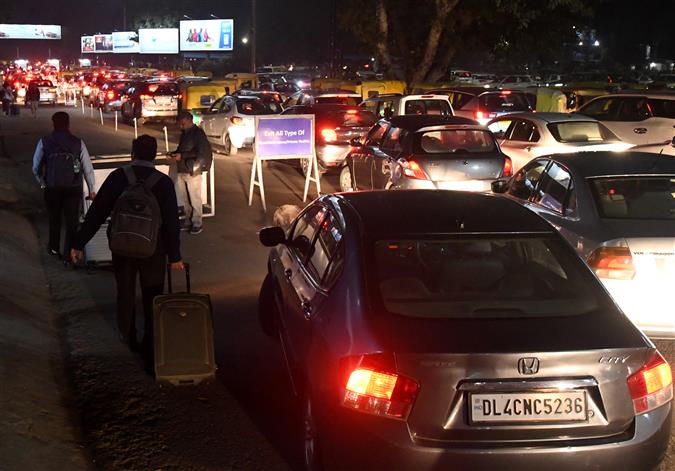 Chaos seems to have become the norm in the exit area of the parking lot at the Chandigarh Railway Station with frequent fights or heated arguments being witnessed between staff and passengers over hefty levy under the six-minute rule for the pick-up and drop-off facility.

Amid chaos, it is not possible for all vehicles to get out in just six minutes. When drivers are asked to pay charges while exiting, heated arguments ensue. — Mahesh Kumar, Cab driver

The system has been adopted after study. It is being followed at other railway stations, including Delhi. Some teething issues remain, but it doesn’t mean the system is not good. — Mandeep Singh Bhatia, DRM, Ambala

The free six-minute period gets exhausted as commuters remain stranded in long queues due to arguments at the exit counter. As a result, vehicles looking for a quick exit within the stipulated period are held up and drivers are forced to pay up for the delay.

Some passengers claim the chaos is being orchestrated by parking staff to ensure maximum number of vehicles leave after paying the penalty. “There is method to this madness. There is little urgency on part of the attendants to ensure smooth egress from the parking area. Arguments often continue for long periods, leaving little chance for those stranded in the queue to beat the clock," claims Satish Kumar, a passenger.

Railway authorities, however, say there is little truth in the assertion. "Why will they do it? No way this is being done to make money," says Sanjiv Chaudhary, acting Superintendent, railway station.

Passengers say due to the six-minute free window, traffic jams have also increased outside the station. Auto-rickshaw drivers and cabbies desist from entering the chargeable zone. Passengers are asked to take a walk on the plea that they cannot afford being charged for overstay in the zone.

"I have to walk half a kilometre with luggage as the cab driver asked me to either come out of the station or pay Rs 50 extra. It is such a hassle. This system must change," says Manisha Jadhav, a passenger.

As most of the cabs, auto-rickshaws and other private vehicles prefer to wait outside, traffic snarl-ups are frequent, especially around the time of arrival and departure of trains.

Manoj Lubana, president of the Chandigarh Youth Congress, which is holding an indefinite strike here, sought at least half an hour window for the pick-up and drop-off facility.

"General public is being harassed due to the illogical move. The window should be increased for the convenience of travellers," he says.

The Railway authorities maintain the new system has been introduced to streamline traffic at the railway station. Mandeep Singh Bhatia, Divisional Railway Manager (DRM), Ambala, says: "The system has been adopted after a study. The same system is being followed at other railway stations, including Delhi. When a new system comes in, some teething issues remain, but it does not mean that system is not good."

He says he has spoken to the UT Home Secretary regarding traffic jams and related issues outside the railway station. "It will be resolved soon," he adds.