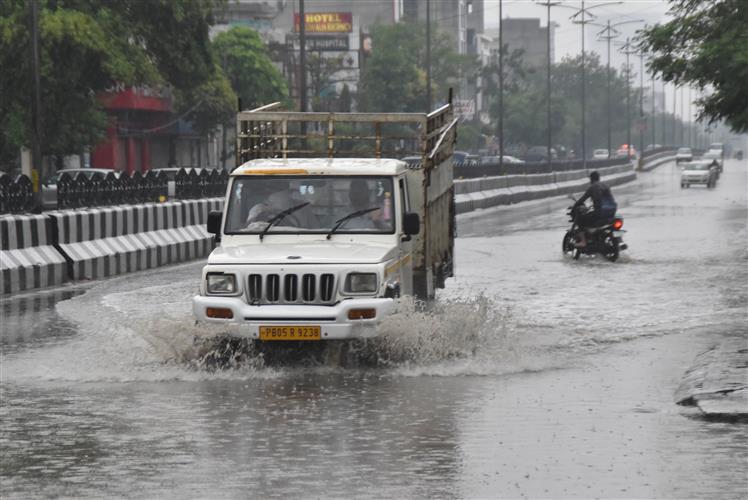 Vehicles travel on a water-logged street in Bathinda on June 14, 2021. Tribune file photo

The early monsoon has hit the region on a hugely positive note, with the agrarian states of Punjab and Haryana receiving higher than normal rain fall in the month of June so far.

From June 1 to June 14, Punjab received 38 mm rain against the normal of 14.7 mm for this period, accounting for a surplus of 158 per cent, according to data compiled by the India Meteorological Department (IMD).

The monsoon arrived over north India about 15 days ahead of its normal date of onset, which is a significant deviation in terms of climatic conditions as well as agro-economic practices. Rains impact sowing and cropping timing as well as the demand of water from dams and electricity or diesel for running bore wells.

Information released by IMD states that as on June 14 the Northern Limit of Monsoon (NLM) is passing through Diu, Surat, Nandurbar, Bhopal, Nowgong, Hamirpur, Barabanki, Bareilly, Saharanpur, Ambala and Amritsar, covering the entire peninsular, central, east and northeastern India and some parts of north-western India.

However due to approaching of mid-latitude westerlies winds further progress  of  monsoon  over  remaining  parts  of  northwest  India  is  likely  to  be slow, according to the IMD.

Earlier, the IMD had predicted normal to above normal rainfall over most parts of South Asia during the 2021 southwest monsoon season from June to September. Geographically, above-normal rainfall is most likely over north-western India and some regions along the foothills of the Himalayas.