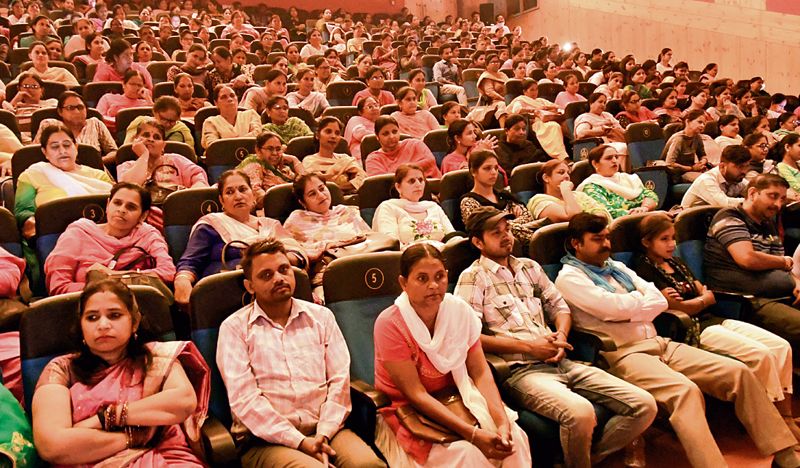 Beneficiaries from the city at Tagore Theatre during a virtual interaction with PM Narendra Modi, who was in Shimla on Tuesday. Pradeep Tewari

Punjab Governor and UT Administrator Banwarilal Purohit today felicitated beneficiaries of social welfare schemes during a state-level event organised at Tagore Theatre in which the beneficiaries and others witnessed the interaction programme of the Prime Minister through the virtual mode.

Purohit was the chief guest on the occasion, while Meenakshi Lekhi, Union Minister of State for External Affairs and Culture, was the guest of honour. MP Kirron Kher was also present.

“I will ensure that every eligible beneficiary gets all benefits under the Central schemes run in our city,” said the Administrator. Stressing on transparent governance, the Administrator lauded the efforts of the Administration in digitising all citizen-centric services. Admiring the beauty of Chandigarh, he said all residents must work together in protecting the title of the City Beautiful.

Under various flagship schemes, Chandigarh is the first UT to introduce the One Nation Ration Card Scheme with integration of the DBT.

On the occasion, 215 beneficiaries got the 10th instalment since the launch of the PM Kisan Samman Nidhi Yojana in 2019 whereas under the Pradhan Mantri Matru Vandana Yojana, 26,937 beneficiaries have been disbursed assistance.

On a mission to end malnutrition, Mobile Anganwadi Van (Poshan on Wheels) is providing services to uncovered population at construction sites and slum areas of Chandigarh. The Administration is also the first in the country to implement the Affordable Rental Housing Scheme. With a target of making Chandigarh the most liveable and healthy city, constant endeavour had been made to improve the social infrastructure, Purohit said.

The event ended with the live telecast of the interaction programme of Prime Minister Narendra Modi with beneficiaries across the districts.