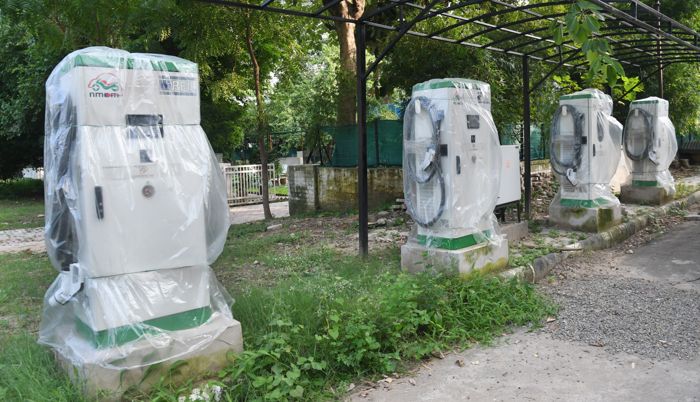 The UT Administration has installed 76 electric vehicle (EV) charging stations across the city, but none of these has been made operational so far.

The Centre had sanctioned 48 charging stations for Chandigarh under Phase I of the Faster Adoption and Manufacturing of Hybrid and Electric Vehicles (FAME) India scheme.

As many as 28 fast-charging stations out of 37 sanctioned under FAME-II scheme have also been installed and energised, but are yet to be made operational and the remaining stations would be installed soon.

Debendra Dalai, Chief Conservator of Forests-cum-Chief Executive Officer, CREST, said all charging stations were ready but had not been made operational as the rates for charging EVs were yet to be decided.

He said tenders were invited to run the charging stations and rates would be decided on the basis of bids received for operating the stations. Four firms submitted their bids, out of which one was rejected when technical bids were opened, he said, adding the firm would be finalised after opening of the financial bids. The rates for charging of electric vehicles would be decided on the basis of the lowest bid, he said.

The selected firm would operate the existing charging stations and install points approved by the government.

In a bid to push the launch of the EV policy, the administration is in the process of installing at least 44 more EV charging stations at different locations in the city under the Chandigarh developer mode. As many as 328 electric vehicles can be charged simultaneously across the city. It will have slow, moderate and fast chargers.

Within six months of implementation of the policy, it will be mandatory for all fuel stations to set up EV charging stations. Building bylaws will be amended to facilitate setting up of these stations in houses and other buildings.

To a question raised in the Lok Sabha recently, the Ministry of Petroleum and Natural Gas had said oil marketing companies as on July1 had established 14 electric vehicle charging stations at their retail outlets in Chandigarh. Both two-wheelers and four-wheelers could be charged at these charging stations.

Dalai said private firms or government departments had also installed charging stations at respective facilities for own vehicles. The Chandigarh Transport Undertaking (CTU) had set up the facility for its electric buses at its depot.