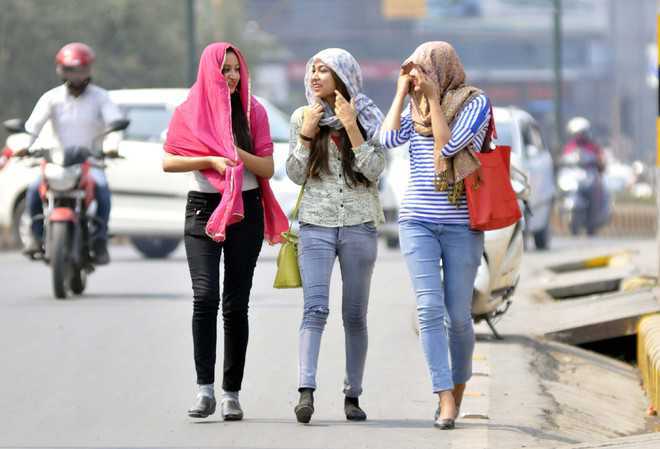 Sultry weather conditions continued to prevail in Haryana and Punjab on Friday, with maximum temperatures hovering 3-7 notches above normal limits.

Chandigarh, the common capital of the two states, recorded a maximum temperature of 39.1 degrees Celsius, three notches above normal limits, according to the Meteorological Department here.

In Haryana, Hisar sweltered at a high of 44.1 degrees Celsius, five notches up against normal while Narnaul's maximum settled at 39.2 degrees Celsius.

In Punjab, Amritsar, Ludhiana and Patiala recorded near similar maximum temperatures of 41.4, 41.7 and 41.3 degrees Celsius, which were four, five and seven notches above the normal, respectively.

There has not been much rainfall activity in Haryana and Punjab during the past 4-5 days making the weather hot and humid.

The south-west monsoon hit the two states including Chandigarh over a week ago.

However, the Meteorological Department here has forecast that monsoon rainfall activity is likely to improve in the two states, including Chandigarh from July 4.

"Because of approaching monsoon system and eastward-moving western disturbance and moisture incursions from the Arabian sea and adjoining Gujarat coast monsoon rainfall is likely to improve in Punjab and Haryana including Chandigarh from July 4 for subsequent 48-72 hrs," Director of the MeT department here, Surinder Paul said.

He further said, "light to moderate rainfall ( 1-3 cm) is likely to commence from Northwestern parts or districts of Punjab and Haryana, including Pathankot, Gurdaspur, Amritsar, Tarn Taran, Ferozepur, Ambala, Panchkula, Kaithal, Kurukshetra, Sirsa, Fatehabad, Hisar and adjoining areas of these districts in both the states from July 4.”

He said the rainfall activity will increase in intensity and distributions during subsequent 48-72 hours with rainfall in almost all parts of Punjab and Haryana, including Chandigarh.

"Weather conditions also indicate heavy rainfall (more than 7cm) in northeastern districts of Punjab and one or two parts of south Haryana on July 5-6," he said.

According to the MeT forecast, the rainfall activity is likely to be accompanied with thunderstorm/ lighting and gusty winds with wind speed exceeding 45 kmph at a time in north-western parts of Punjab and north and southern parts of Haryana on July 5-6. PTI