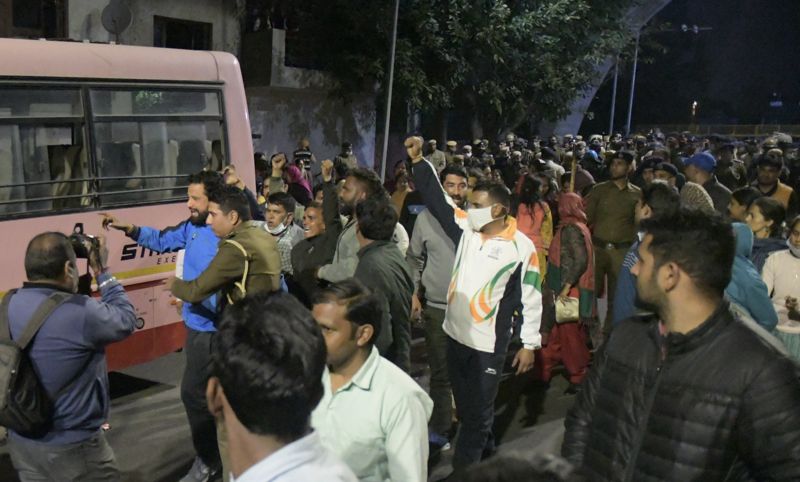 Protesters being arrested in Panchkula on Wednesday. RAVI KUMAR

The police today arrested 14 persons, including AAP leader Naveen Jaihind, who were trying to enter Chandigarh to lay siege to the Chief Minister Manohar Lal Khattar’s residence in protest against the neglect of the demands of extension lecturers, under the banner of the Extension Lecturer Welfare Association.

A large number of protesters, who had first gathered at the designated site in Sector 5, were stopped by the police at the Panchkula-Chandigarh border near the Housing Board Chowk as they marched towards Khattar’s residence.

A panel of extension lecturers went to meet ADC to CM Rajneesh Garg at the PWD Rest House in Sector 1. However, the meeting largely remained “unfruitful”.

According to the extension lecturers, the senior official of the state government made no commitment and just said he would forward their demands to the CM.

The lecturers said they would intensify their protest and gherao the Haryana Vidhan Sabha during the Budget session in March.

The Sector 14 SHO, Inspector Dalip Kumar, said they had arrested 14 persons, including AAP leader Naveen Jaihind. He said further action would be taken as per the CrPC.

The extension lecturers said they had been camping at a designated protest site in Sector 5 for over a month. Their key demands are job security, dearness allowance and implementation of services rules.