Say won’t budge till their demands are met; draw electricity from main lines to power fans

The road connectivity between Chandigarh and Mohali is likely to remain affected tomorrow at Shaheed Lt Col Bikramjit Singh Shaurya Chakra Chowk, also known as YPS Chowk, due to the ongoing farmers’ protest in support of their demands.

Hundreds of farmers, along with their tractor-trailers, jeeps and trucks, choked the road leading to Chandigarh today. Members of the Samyukt Kisan Morcha and youths gathered at Gurdwara Amb Sahib this morning and started a march towards the Punjab Chief Minister’s residence in Chandigarh stating that their demands had remained unfulfilled for over a month. The protesters broke barricades installed by the Mohali police, but were stopped at the barricades installed by the Chandigarh Police at a small distance.

The police had made massive arrangements and deployed personnel, including anti-riot police, in large numbers to thwart any attempt of crossing the barricades.

Farmers said they had come prepared with tents, mattresses, coolers, refrigerators, kitchen utensils, water tankers and groceries. The common talk among the protesters, with charpoys laid on the road, was to make the AAP government accede to their demands or be ready for a repeat of a Singhu-like protest.

More than 100 tractor-trailers clogged the road leading to YPS Chowk with a jam-like situation for sometime near Fortis Hospital. Most of the road users on this stretch were in for a surprise after seeing barricades and police presence this morning. Traffic remained minimal on the Sector 51/52 light point to the Mataur barrier after 10 am.

A Sector 44 resident, Shrishti Mehra, who is a schoolteacher in Sohana, said, “The road was open in the morning, but when I was going back home around 3 pm, I had to take a long detour to under the scorching sun.”

Babu Lal, a mechanic in the Sector 51 motor market, said, “It turned out to be a very bad day for me. No work, no customer. I heard it is going to be same tomorrow. I fear what if this protest goes on for long time.”

Farm union leader Baldev Singh Sirsa said, “We were told that a meeting had been fixed with the CM around 11 am. A bus too was sent for us at Gurdwara Amb Sahib, but later we came to know that the meeting had been rescheduled.” 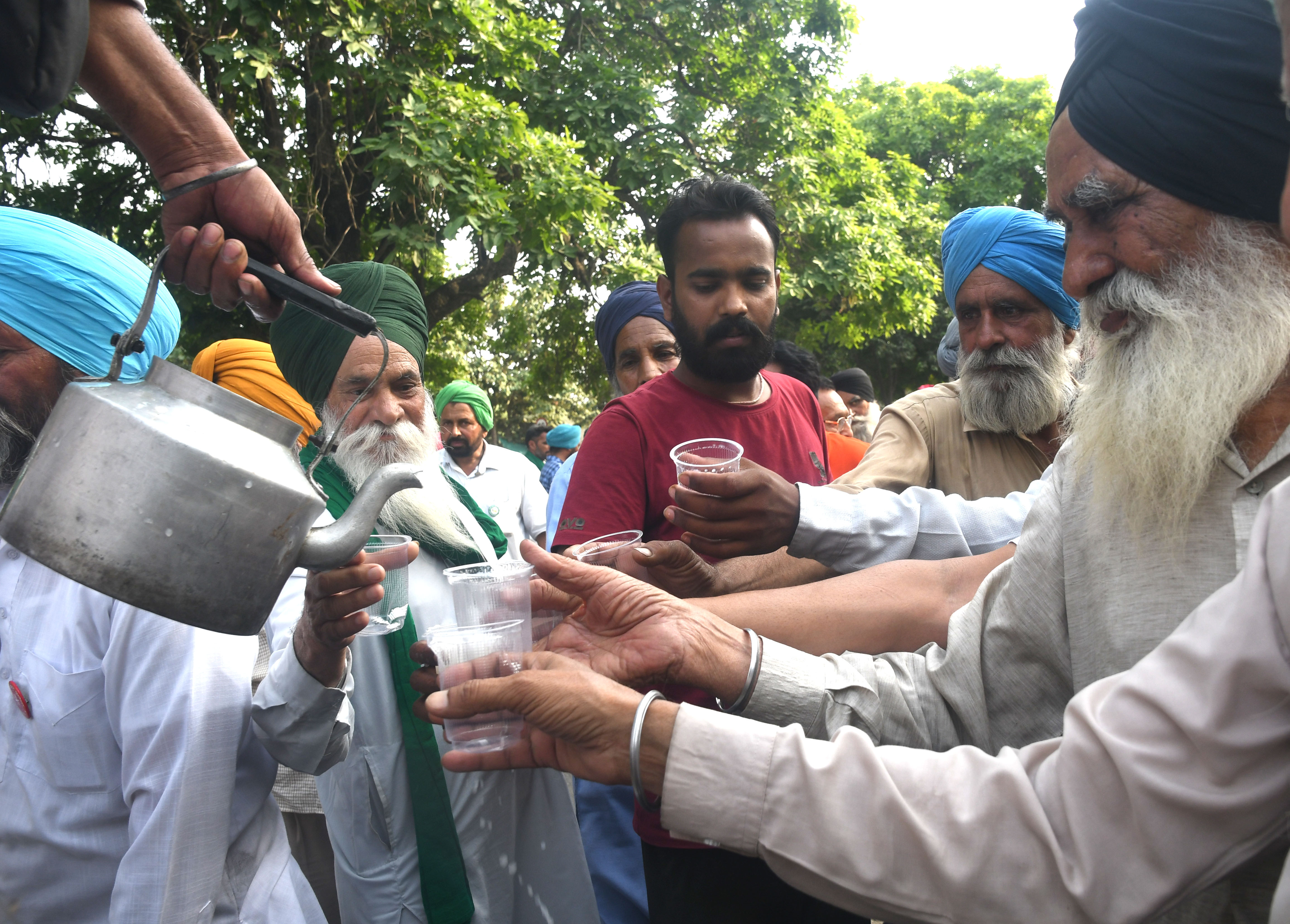 Another leader Dr Darshan Pal said, “The government should immediately try to resolve the farmers’ issues as grain production has not been as expected. The paddy season is about to begin with no reassurance on power and water supply. The move of the government to reclaim land should be stopped. The matter needs to be studied across the state and a committee needs to be constituted on this.”

Farmer union members are protesting over 13 demands, including compensation for less production of grains due to excessive heat. The government has announced paddy sowing schedule from June 18 in a staggered way to provide power and conserve groundwater. Farmers said paddy sowing should begin on June 10 as delayed sowing will affect the next year’s wheat crop.

A few protesters drew power from the main lines along the road to power their fans and coolers. Wet clothes were hung for drying on a makeshift wire contraption in the green area of YPS Chowk.

Among the Samyukt Kisan Morcha protesters were present a group of members of the Mahila Kisan Union, who vowed to sit on an indefinite protest till Chief Minister Bhagwant Mann met them and addressed their demands. Union president Rajwinder Kaur Raju said, “Like the Delhi protest, our struggle will continue till our demands are met. Farmers from across the state have gathered here and the numbers are going to swell soon.”

Hundreds of farmers, along with tractor-trailers, jeeps and trucks, choked the road leading to Chandigarh. Members of the Samyukt Kisan Morcha and youths gathered at Gurdwara Amb Sahib on Tuesday morning and started a march towards the Punjab Chief Minister’s residence in Chandigarh stating that their demands had remained unfulfilled for over a month.