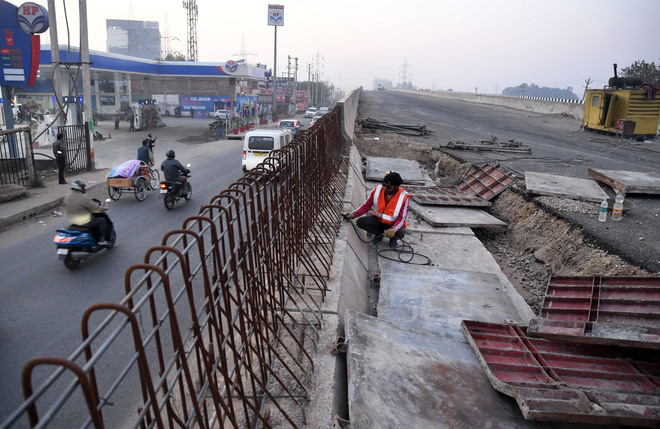 Work in progress on the Mohali-Kharar flyover on Monday. Tribune Photo: Pradeep Tewari

After missing six deadlines in a row for two years, the National Highways Authority of India (NHAI) is poised to throw open the Mohali-Kharar flyover by January 15, giving the much-needed respite to commuters.

After opening 1-km stretch of the much-delayed Mohali-Kharar flyover starting from Balongi (called as Balongi flyover) a month ago, the NHAI would complete the final phase of the flyover by January 15.

According to information, the NHAI is going to complete a stretch of the flyover on the Kharar side, which connects the Ludhiana road, in the second week of December.

It is pertinent to mention here that the deadline for the completion of the flyover was September this year, but the work on the project was delayed due to the lockdown. The work was restarted after the district administration gave nod on April 19. Earlier, the project had missed several deadlines. The NHAI had handed over the Rs368-crore project to Larsen and Toubro (L&T), which began the construction of the flyover in November 2015. The project was initially planned to be complete by December 2018. From delay in land acquisition to other administrative hurdles and workforce issues amid the pandemic were the main reasons for the delay.