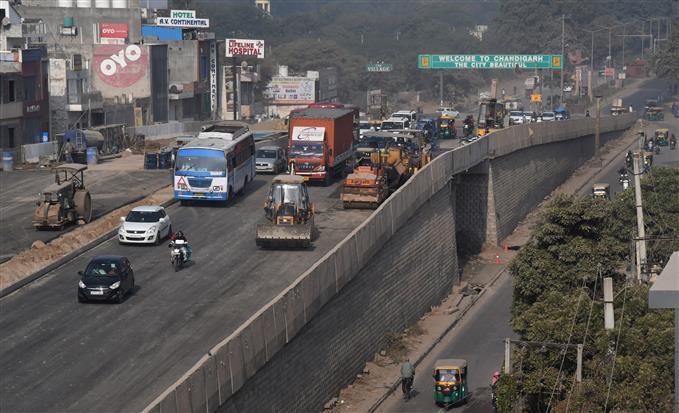 Vehicles ply on the Chandigarh to Zirakpur section of the flyover during a trial run on Friday. RAVI KUMAR

After months of delay, a section of the Zirakpur flyover will finally be thrown open to road users on Saturday morning.

A trial run on the Chandigarh to Zirakpur section was conducted in the morning and evening hours today and it would be opened tomorrow, said PWD officials.

The entire flyover would be made fully operational by December 10. The work was still underway on the other section — Zirakpur to Chandigarh — which would be completed next week.

Premix material for roads with heavy vehicles has been laid. Work is in final stage. Trial run was held to check surface. —Rajpreet Sidhu, PWD XEN

“The dense bituminous macadam (DBM), a close-graded premix material used for roads that witness a large number of heavy vehicles, has been laid and only bituminous concrete (BC) layer is to be laid. Work is in the final stage. We have conducted a trial run today to gauge the behaviour of the surface,” said PWD XEN Rajpreet Sidhu. The Mohali Deputy Commissioner had given instructions to complete the work by November 30, after which he visited the site yesterday to review the pace of construction work. The opening of the section will come as a relief for road users and local residents, as their patience has been wearing thin due to frequent snarl-ups, increasing the travel time by up to an hour. With the wedding season on, traffic snarl-ups are frequent in the afternoon and evening hours due to the presence of a large number of banquet halls in the area.

To make matters worse, impatient drivers tend to jump the median and drive on the wrong side of the road.

Zirakpur traffic incharge Rajpal Singh said: “The flyover will solve the traffic mess in the area to a great extent. Traffic policemen are being deputed during the trial run for a few hours.”